Mexico City-based Taller de Arquitectura de Alto Rendimiento (TAAR) built El Humedal, or The Wetlands, from a mixture of natural and recycled materials according to the principles of zero waste and net zero energy consumption.

To realise their eco-friendly design, TAAR looked to the architecture of the Mazahuas people, a pre-hispanic culture living in Valle de Bravo.

The research complex is surrounded by an edible forest,  organic orchard, and a man-made wetlands environment with several pools. 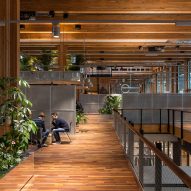 Volcanic rock was also used for the flooring, along with terrazzo for the laboratory floors and work surfaces.

Decking for indoor and outdoor areas was made using a plastic created from 100 per cent recycled material.

"In this project we tried to make everything conscious, from the resources that the project needs to generate in order to operate, to the concept of generating something out of something else's waste," Galindo said.

"[The] common waste conception is flawed because it's perceived as something that we don't want, the challenge was to think of it as a valuable resource. All of this implies a new way of living, understanding our evolutionary potential with nature."

Rainwater is harvested for use in the building and solar panels generate all the energy the research facility needs to function.

Sewage is passed through biologically powered treatment plants that creates compost from a mixture of human faeces and prunings from the forest.

The layout of the research units themselves draw on more contemporary elements of local architecture, including Mexican plazas, and colonial-era patio houses.

"Porches are used as a unifying element between rooms that forces people to generate a bond with the exterior space, its natural surroundings," explained Galindo.

Along with a laboratory for scientists to carry out their research, the main building of El Humedal contains a seed cellar for storing specimens, a wine cellar, a multipurpose workshop, and offices and bathrooms.

A supplementary building on the south side of the compound houses a maintenance warehouse and the greenhouse, with parking and the water treatment plants located underground.

Research facilities and their particular needs often require architects to think outside of the box, technically and aethetically. US firm Gluck+ is designed a research laboratory on an island in North Carolina, America, that could withstand hurricane force winds and storm surges.

For a subantarctic research centre on the southernmost tip of South America, New York-based Ennead Architects designed three pavilions from weathering steel with dramatic profiles that echo the surrounding mountains.