The broken-up massing of this Duke University research facility by US firm Gluck+ is meant to help protect the building from storm surge.

The Dr Orrin H Pilkey Research Laboratory is situated on the southern tip of Pivers Island, in the village of Beaufort, North Carolina. The building is part of Duke University's Marine Lab campus, which was established in the 1930s.

The 14,000-square-foot (1,300-square-metre) building consists of different sized volumes that are asymmetrically composed.

At ground level, boxy forms are arranged in a pinwheel formation around a central element. The "jagged footprint" enables the facility to better withstand storm-surge velocity, according to Gluck+, a New York-based firm.

The lower level is clad in cypress, which takes cues from the historic architecture on the waterfront campus. Two different stains were used – one a water-based clear finish and the other a custom reddish hue.

Sitting atop the lower level is a rectangular volume wrapped in white cement board and punctuated with small horizontal windows. On the southeast elevation, a recessed balcony offers a view of the water.

Concrete masonry was used for the building's foundations, while wood was employed for the structural framing and envelope – decisions that were influenced by construction techniques that dominate the region.

Programmatically, the building has distinct zones. The lower level houses offices and social space, while the upper portion contains labs.

At the heart of the ground floor is an area named the Collisional Commons, where ideas from researchers are meant to "collide informally". Designed to be visually and spatially porous, the commons connect to outdoor porches that are shielded from seasonal winds.

Various program areas are situated around the commons, including faculty offices, an area for PhD students, and service space.

The labs – including "mission-critical equipment and irreplaceable specimens" – were placed in the upper volume, in order to protect them from storm surge and rising sea levels.

Solid walls maximise space for equipment and storage, while also helping protect against hurricanes. Natural light filters in through the small horizontal apertures.

"The strategic placement of windows at desk height creates unexpected framed 'windows to the sea' without sacrificing the program," the team said.

Landscaping features also protect the building from natural elements. Scuppers – which enable the discharge of water – eliminate the need for hard stormwater structures, while berms help prevent scouring on the walls.

The building has a number of sustainable features, including low-flow plumbing fixtures and smart lighting systems. The project earned LEED Gold certification from the US Green Building Council.

A notable aspect of the project was that it was executed using an architect-led-design-build (ALDB) process.

"ALDB relies on access to subcontractors during the design period to obtain market feedback, and to allow early redesign without program loss by reshaping the building and making the design better," the team said.

Other research facilities in the US include a sculptural, copper-clad building in Phoenix by CO Architects and Ayers Saint Gross, and a pharmaceutical campus in Cambridge, Massachusetts, designed by Toshiko Mori, Maya Lin and CannonDesign. 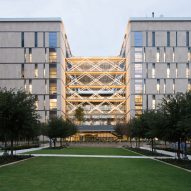