The studio headed by Doug Eckford and Tania Chong was tasked with overseeing the internal and external renovations of the property in Walthamstow, which is occupied by a growing family.

The owners of the detached end-of-terrace house wanted to reorganise and improve the existing spaces, and create a new garden studio to provide a quiet place for working from home.

Eckford Chong performed the roles of architect and main contractor on the project, which it began by opening up the ground floor to make the most of the available natural light.

The new sequence of spaces features a pared-back material palette, including wooden accents that introduce a warm tone and texture to the predominantly white-painted kitchen and living area.

Instances of colour and pattern, such as the tiled flooring in the kitchen and hallway, stand out against the neutral backdrop.

A window and a large glazed door in the kitchen's end wall look out onto the garden and a new pavilion provides a workspace for the cinematographer owner.

"The lightweight pavilion borrows heavily from the Sukiya-zukuri (referring to the clients much loved Japanese tea house) aesthetic," the architecture firm said in a statement.

"The building both resembles the ancient Chashitsu (tea houses) and serves as a structural and phenomenological study of the type, which is born out of our combination of architectural and building practise."

The simple structure is positioned beneath a mature cherry tree that offers another link to Japan. It features a concrete base that was cast in situ and is topped with a timber frame clad in stained larch boards.

The blackened surfaces recall the materiality of typical tea houses, which are often built from wood that is scorched to preserve it using the traditional Japanese technique of Yakisugi. 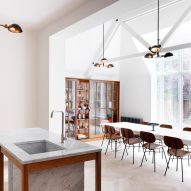 The timber treatment creates consistency with the garden fence and a lean-to extension abutting the ground floor of the house, which contains utility spaces including a laundry.

The pavilion's interior features stained-timber flooring that matches the exterior and contrasts with the warm, untreated plywood panelling used for the upper portion of the walls and ceiling.

Glazed sliding doors and a large roof light allow plenty of natural light to reach the workspace, which incorporates a pair of built-in desks, a stove, a sofa and a compact washroom.