A "sculptural block of cinema screen," positioned at the centre of the arena plays a series of still images – charcoal drawings – that act as triggers for the AR technology.

When audience members look through the custom-made U2 Experience app on their smartphone, the trigger drawings are transformed into a series of superimposed, AR images and videos.

The app and the material within it were conceived by U2’s creative director Williams, who has been working on innovative technology for the band for 30 years. Williams worked with Treatment Studio on the design of the avatar itself, and with Nexus Studios on the AR technology.

The first part of the AR display plays during the pre-show music, and sees the stage recast as an enormous iceberg that gradually melts into water, flooding the floor of the arena and "engulfing the audience in the deluge," describes Devlin.

The AR trigger image then splits and shifts to reveal U2's lead singer Bono embodied by a giant AR avatar that "looms magically" over the audience, and echoes the singer's movements as he sings the first song, Love Is All We Have Left.

According to Devlin, the pre-show flood "prefigures the cataclysm of the tsunami" that comes at the mid-point of the show, visually enacted as a series of waves across the screen during the song The End of the World.

This tsunami amalgamates all the projected elements already seen throughout the first half of the show in a "chaotic" collage of waves.

Devlin explains that these albums include much autobiographical and reflective material that spans the band's formative period in 1980's Dublin, through to their personal and political present. 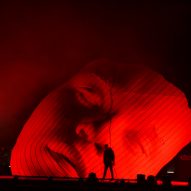 "Like the 2015 Innocence + Experience tour, the new Experience + Innocence tour is grounded in the story of the void left by the death of the then-teenage singer's mother, and the subsequent shaping of the four band members by the visceral political turbulence and military violence of 1980's Ireland," Devlin told Dezeen.

"While much of Songs of Innocence was written as if reliving and revisiting in vivid detail the territory of 1980's Dublin – as if reinhabiting those characters in the first person – much of the material in Songs of Experience takes a more macro narrative stance, almost as if the narrator is writing from beyond life," continued Devlin.

"The urgency of the reinhabited turbulent, raging youth in innocence gives way to an equally urgent but more distant stance in experience, as if the camera has shifted from extreme granular close up to all encompassing wide shot."

According to the designer, the new show takes a line from the track Love Is All We Have Left as its guiding principle: "Now you're at the other end of the telescope."

"The line refers to the shift in perspective that the narrator of some of the Songs of Experience has adopted," said Devlin.

"Events of the past are now seen through a futurist lens as the narrative is picked up where the 2015 tour left off."

The U2 Experience app enables members of the audience to take photographs that simultaneously capture both live and AR elements.

The direction and design of the show is the result of a collaboration between U2, Willie Williams, Es Devlin and Stufish Studios, which began in 2014.