Sri Lankan practice Zowa Architects has used bamboo canes to shroud the glazed walls of this boutique hotel in Uttarakhand, India, which cantilevers out to give optimal views of the Himalayas.

The hotel is situated in the village of Kasar Devi, taking its name from the surrounding region of Kumaon which is known for its picturesque landscape of mountains, forests and valleys.

Set into a ridge of Nanda Devi mountain, The Kumoan lies 1600 metres above sea level and is accessed via a steep path that runs down from the main road.

Abundant glazing gives holiday makers picturesque views of the peaks from the position the hotel occupies on a terraced site, which is made up of a hectare plot topped by a smaller parcel of land.

The hotel's main building is perched on the site's highest point and comprises two rectilinear volumes covered partially in bamboo.

Its upper level, which plays host to the dining room, has been set at a right angle to the lower level and fronted with glazing on three sides to provide dramatic vistas of the Himalayas.

A lounge, library, and various administrative facilities are contained at ground level – and the roof of the lounge can also be used as a space for outdoor dining and yoga.

"Overall our attempt was to highlight the stunning natural landscape and focus on the mountain views, while paying homage to local materials, tradition and culture," said Zowa Architects in a statement.

The hotel's 10 guest suites have been arranged into pairs, forming what the architects refer to as a series of "chalets". 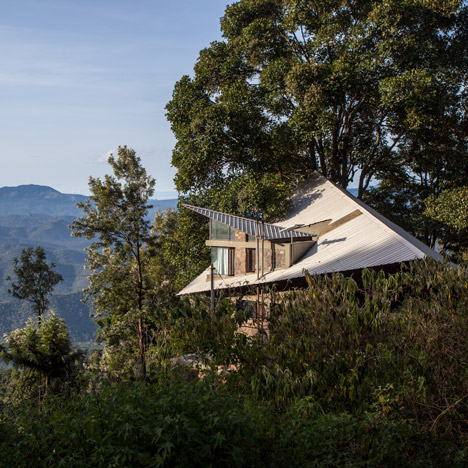 While the base of these structures are constructed from locally quarried stone, the rest has been crafted from bricks made of ash and then clad in bamboo sticks.

"By dispersing the built structure around the site and also by using the bamboo cladding we were able to dissolve the visual impact a building such as this can have in a sensitive environment," explained the practice.

When it came to designing the hotel's interiors, the architects wanted each space to evoke "rustic simplicity".

Each of the buildings are served by harvested rain water, collected by an extensive drainage system that leads to a large storage tank at the bottom of the site.

The practice is also planning to make use of any leftover land on site by planting seasonal crops that will eventually yield fresh produce for the hotel's kitchen.

New Delhi-based practice Matra Architects recently completed a holiday home in India's Nainital district that also offers views of the Himalayas, and which features a pointed timber roof inspired by the shape of mountain peaks.

Photography is by Akshay Sharma.