Milan-based designer Emanuele Magini has created a chair for Italian brand Company Campeggi, which is inspired by the work of artist Anish Kapoor.

Called Anish, the chair features a circular elasticated fabric held together by a metal base and a polyester seat.

Described by the designer as the "perfect synthesis between sign and function", Magini was inspired to create the seat after watching a lecture by British sculptor Anish Kapoor on his concept of "non-object", which he describes as an object which is not an object.

Magini wanted his creation to emulate this concept by creating a chair that does not immediately appear as a chair. "It's an object that really provokes a reaction from users," he told Dezeen.

To achieve this, a circular sheet of blue elasticated fabric was stretched against a metal frame to create the illusion of there not being a chair. 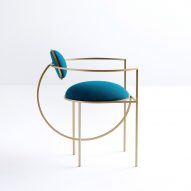 Behind it, a semi-circular cushioned seat in the same shade of blue is connected to the fabric facade. It is only when an individual attempts to sit down that the fabric stretches to reveal the chair.

The gold-coloured frame of the Anish chair curves around the back of the structure in the shape of a semi-circle and forms a circular support at its base.

"It's an object that really provokes a reaction from users," said Magini. "Most of them are scared, others want to understand what is the trick, how it is made and designed, and others jump straight in it!"

"When you are a designer, you are like a wizard: you always work to create these effects, you always search for a new way to take another white rabbit out from the black hat," he explained.

He is best-known for his large-scale public sculptures, including the controversial 115 metre-high ArcelorMittal Orbit sculpture in London's Olympic Park.