An intricately decorated Persian box provided a starting point for the latest range of designs from New York studio Apparatus.

For its third collection, Act III, the brand's creative director Gabriel Hendifar looked to his personal heritage for influences.

He began with a box decorated with the Persian Khatam inlaying technique, which his grandmother brought with her to the US after leaving Iran as a political refugee in 1979.

The object sparked an exploration into artefacts and aesthetics from across the region, and resulted in a variety of designs all linked in some way to this culture.

"As a first-generation American born after the Islamic Revolution, Gabriel's moments of intersection with Iran and its culture were experienced at a distance," said a statement from Apparatus. "Passed down as an idealised and melancholy memory, it is kept alive through storytelling, food and music."

"This collection is an attempt to create a tangible connection to this place suspended in time, while also imagining it as a futurist fantasy," it added.

The collection includes five series of furniture, lighting and homeware. The first is a set of lamps called Median, and is typified by planes of translucent alabaster stone intersected by fluted brass elements. The table and pendant models are designed to evoke traditional Middle Eastern jewellery.

"The stone glows from a light source that remains hidden, illuminating the relationship between the solid and the permeable," said Apparatus.

The Talisman series of lamps features beads of agate, jasper and jade beads fixed to leather-bound brass structures, based on those found on statures from the ancient city of Persepolis.

The Shiraz series, named after the city that Hendifar's grandmother is from, includes different-sized vessels and candlesticks that all rest on balls.

"The centuries-old capital of Persian culture and a central hub on the Silk Road, the city of Shiraz has historically been the meeting point for an exchange of ideas between the Orient and the Occident," Apparatus said.

"The Shiraz Series imagines objects of pan-cultural influence, blending a modernist interpretation of classical western forms with the intricate, geometric style of Persian marquetry called Khatam that originated in the city."

Items in this series were planned to be produced in two variations: with solid brass and Italian marble, and a limited-edition range crafted in Iran from wood, metal, and camel bone in a kaleidoscopic pattern. However, only the first will be available for the time being. 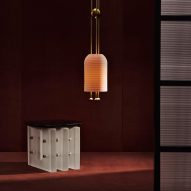 Apparatus looks to Wiener Werkstätte for 2017 furniture and lighting collection

"Unfortunately, due to current US sanctions against trade with Iran, which were recently expanded to include art objects, and having exhausted all possible avenues, we are prevented from producing the limited-edition collection for the foreseeable future," said Apparatus' statement.

The pieces will also be shown at the brand's principal space in Manhattan as part of NYCxDesign, taking place across the city from 11 to 23 May 2018.

Apparatus was founded by Hendifar and partner Jeremy Anderson in 2012. Its previous collections have drawn inspiration from the Wiener Werkstätte art movement and the forms of ceremonial objects used for ancient rituals.