New York designers Bec Brittain and John Hogan have worked together to update her Aries lighting series with sculptural glass pieces, on show during this month's NYCxDesign festival.

Hogan – a glassbower by trade – has added spears, bubbles and bent bars to Brittain's Aries lighting system, producing three designs that are each available as a limited-edition run of 10.

Although Aries debuted last year, Brittain has worked on turning it from "a very expensive prototype" into a functioning system that was able to accommodate Hogan's glass designs.

"We spent the last year completely overhauling Aries as a system," she told Dezeen. "It has all this flexibility, and I knew there was room for someone to use it as the skeleton and play."

The pair had wanted to collaborate for some time, but busy schedules had prohibited a full new project together. Therefore the opportunity to develop an existing design seemed more appropriate.

During the overhaul of Aries, Brittain had to take into account the weight of the glass pieces that Hogan intended to introduce.

"We had to develop new hardware to hold these glass pieces in parallel," she said. "The standard Aries is very celestially inspired. But the weight of his glass was so substantial that I could build forms like [those before], because they would break."

The result is a departure from her usual work in brass, instead opting for aluminium to act as the structure for the fixtures.

The system comprises cylinders that can hold LEDs in their tops and bottoms, and be connected in a variety of formations using slender horizontal rods.

Aries was originally designed with small prism-like crystal pieces that refract the light sources, but Hogan replaced these with larger glass sections that transform the system into more sculptural shapes.

The first is a set of tubes, which criss-cross between the metal structure. Their ends are angled and covered in dichroic glass – coated in titanium to create colourful effects.

"This one is the most freeform," said Brittain. "Because the glass rods are spanning multiple stacks, they end up having a supporting role in keeping it together. Practically, we needed it more open so there was room for the crossing spears." 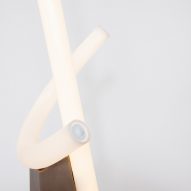 Another design supports gently curved transparent bars, slotted into the cylinders at both ends. To support the weight of these glass pieces, a more rigid frame was required.

"It's more like architectural trusses, which are truly to be structural and handle the weight of the glass," Brittain said.

Finally, a similarly architectural fixture features bubble-like glass additions that are lightly coated in a silver-based fume while the glass is hot to create an iridescent appearance.

Brittain is showcasing these three designs along with her standard Aries series at her showroom in New York's Chelsea, during the city's NYCxDesign festival.

NYCxDesign kicked off on 11 May 2018 and runs until 23 May 2018 – see our guide to the exhibitions and installations taking place during the festival.