Brooklyn design brand Good Thing has launched a collection of furniture and lighting designed for those who live and work in the same place, including a stackable table for snacking and a dimmable light to create different moods.

The designs are intended to help merge home and office, in response to recent changes in working styles. Developments in technology are allowing more people to work from home than before, and also resulting in more relaxed and homely office environments.

"With internal communication now efficient at distances near and far, proximity is not a necessary part of working on a team," said Good Thing in a statement. "With this change in office culture, more and more people are working from home."

"Good Thing's new collection of products addresses this shift, offering solutions that are equally suitable to the home and office, and the many home offices and office lounges that now exist between them," the brand continued.

Products in the range include a collaboration between Good Thing founder, Canadian designer Jamie Wolfond, and New York-based designer Ben Kicic, which resulted in the stackable aluminium side table called The Lily Table. 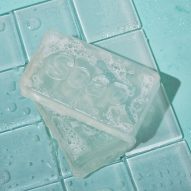 Jasper Morrison's Soap allows for washing "without anything unnecessary"

Wolfond and Kicic's design features a round base and a top with cut outs, enabling several to be slotted together, like a stack of chairs often seen in an office. Rather than placing the support in the middle, the top and bottom are connected diagonally to leave enough room to pull over the user's legs and form a workstation.

"The table's cantilevered silhouette can easily be pulled up to a sofa or lounge chair, making it an excellent mobile work or snack station," said the brand.

French designer and artist Ferréol Babin's Shutter Lamp is intended to allow for a variety of lighting levels, for working and relaxing. LEDs are contained in an oblong topped with a circular shade, which moves on a hinge to either block or open up the light. The lid also works as the switch for turning the light on or off.

The lamps – which can be set on the floor, a table, or a mounted on the wall – is one of two lights the collection.

The other is a pendant designed by Rotterdam-based Earnest Studio. Named Clover Pendant, the flower-like lamp comprises three conical shades that resemble loudspeakers, each with a light bulb inside.

Toronto-based design practice MSDS Studio has contributed two pieces to the collection: a bar stool, and a coffee table comprising a circular top and vertical supports encircled by a loop.

The works are an extension of the studio's 6063 series, named after the pure aluminium alloy from which it is made.

Good Thing will present the collection in its Work From Home installation at The Penthouse in The Standard Hotel, 848 Washington Street, New York.

The showcase will display the new furnishings in a lounge setting, arranged by prop and set stylist Margaret Macmillan Jones. It will be open to the public from 17 to 18 May 2018 as part of the city-wide NYCxDesign festival, which continues until 23 May 2018.

The collection will officially launch next week at the International Contemporary Furniture Fair (ICFF), hosted at New York's Jacob K Javits Convention Center, 11th Avenue at 38th Street, from 20 to 23 May 2018.