Morrison has taken his pared-back aesthetic to the extreme with Soap: a simple body-washing product that is decorated only with an imprint of its name.

The bar is made of translucent glycerin soap that is set in a mould to create four joined sections, which can then be snapped apart and placed at different wash stations around the house.

The recessed lettering, which eventually wears away during use, is also formed during the moulding process. It bears similarity to the logo of cult fashion label Supreme, which has added its simple branding to mundane items like bricks.

Along with being stripped back aesthetically, Soap is also made with few materials and is fragrance-free, so that it is "hypoallergenic and very gentle on the skin".

It is produced by Brooklyn design brand Good Thing, which approached the designer after noticing he was liking images on its Instagram account.

The brand's founder Jamie Wolfond said choosing Morrison to completely strip the product down to its essentials was a no-brainer.

"The idea to create a bar of soap stemmed from our belief that this elemental and historically rich tool should be elementary in its nature — it should do what it's supposed to do, do it well, and do it without anything unnecessary," Wolfond told Dezeen. "It was for this reason that Jasper Morrison was an obvious choice."

Since setting up his Office for Design in London in 1986, Morrison has created a host of products in the minimal aesthetic since, including furniture, customisable kitchens and clothing, and most recently a shelf for publisher Penguin.

Soap is available for pre-order on Good Thing's website and cost $29 (£20). It provides an expansion of the brand's existing furniture collection and everyday tools for the home.

"When we started, Good Thing was a home accessories company, and last May, we launched a line of furniture, lighting and rugs," said Wolfond, who set up the brand in 2014.

"Now, with the release of Soap, we think of Good Thing as a brand for the home as a whole, investigating and simplifying the relationship between a person and their most intimate space."

Morrison is not the only well-known designer to offer an update to the everyday essential washing items. Last year saw British designer Tom Dixon extend his accessories range to include washing-up liquid. 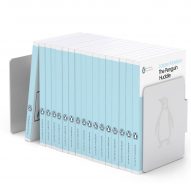 Jasper Morrison designs shelf that grows with your book collection