MINI has created a special-edition car to celebrate the marriage of Prince Harry and Meghan Markle, featuring a bespoke graphic print and 3D-printed details.

Designed by the brand's in-house design team, the one-of-a-kind MINI 3-Door Hatch boasts a bold graphic across its roof, as well as a series of personalised details both inside and out.

It will be donated to a charity chosen by the couple, The Children's HIV Association, for public auction following the royal wedding on 19 May 2018.

"As an iconic British brand with almost 60 years of history in the UK, we are pleased to mark the royal wedding with this special charitable gift," said Oliver Heilmer, who heads up MINI's design team.

"Its specially designed roof graphic combines with 3D-printed personalised interior and exterior details as well as special embroidery to make this a MINI like no other," he said.

A pale shade, called Crystal White, was chosen for the exterior of the one-off design. Over this, MINI has added silver-blue stripes to wrap the body of the car and a framing black outline featuring a metallic blue tint. 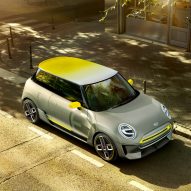 For the roof, the designers created an abstract pattern in shades of black, white, blue and red. This combines elements of both the UK's Union Jack flag and the American Stars and Stripes flag, to represent the nationalities of the couple.

According to MINI, this was "applied meticulously by hand in several layers".

Other bespoke exterior details include 3D-printed signal indicators, which are embellished with the initials "M" and "H" for Megan and Harry, and include a heart and ring symbols.

When the car is opened, the indicators project the words "just married" onto the ground in front of the driver and passenger doors.

Inside the car, the first names of the couple and the date of the wedding are embossed onto a large strip above the front passenger's seat, while the sun visor features the words "love is" in a typographic style.

The Union Jack can also be spotted on the rear lights when they are illuminated.

This is not the first limited-edition MINI the brand has released this year – in March it unveiled a one-of-a-kind, all-electric version of the classic MINI, to promote its switch to zero-emissions production vehicles next year.

Other recent designs revealed by MINI include a concept for a zero-emissions vehicle, a version of which will go on the roads in 2019.