A vaulted brick extension is amongst a host of features that Renato D'Ettorre has introduced to this Sydney home during a renovation that takes note of traditional Italian villas.

Set within the city's Surrey Hills suburb, Italianate House is a Victorian-era property that was formerly used as offices. It is now owned by a young couple, who tasked Australian practice Renato D'Ettorre Architects with making the space suitable for their growing family.

Keeping their brief largely open, they specified that the architects should create three bedrooms and some guest quarters, all with a contemporary fit-out.

D'Ettorre and his team first set about transforming a building located at the rear of the three-storey property, extending its structure to form a double-height living space. It has been completed with a vaulted brick ceiling and fronted with glass, offering views of a small courtyard that features a mature tree.

The use of brick continues down to the walls, emulating what the architects described as the "mellow, soft patina" of traditional Tuscan or Sicilian villas. Arch-shaped doorways have also been inserted throughout to echo the form of the ceiling.

"The low heritage significance of the existing rear wing offered an opportunity for total restructuring, so it was here that the most dramatic design intervention took place," explained the architects in a statement.

Part of the building's new first floor has been cut away to form a mezzanine-level bedroom. The second floor has then been made into a conservatory, topped by a double-glazed roof that allows the space to serve as an indoor garden throughout the colder months. 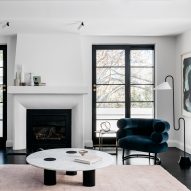 Arent & Pyke updates home for a gallerist with monochromatic rooms

In the main house the architects have strived to preserve historic details, restoring the original wooden staircase and a number of glass-panelled doors.

New features include herringbone wood floors, a kitchen with gold-hued brass cabinetry, and a bathroom decked out almost entirely in white Carrara marble.

A set of perforated white metal stairs has also been added, which leads inhabitants to a greenery-filled roof terrace on top of the property's carport.

"The inspiration came from the admiration of timeless materials with their inherent durability, quality, colours and special properties which convey feelings of natural origins all contributing to giving the house an overall sense of earthiness and durability," Renato D'Ettorre, the practice's founder, told Dezeen.

The property's former stables have also been updated to serve as guest quarters or accommodation for the client's elderly parents, and finished with sandstone walls.

London-based practice Studio Ben Allen added a pair of brick vaults to extend a Victorian terrace house in York, making room for a new kitchen, living and work space underneath the arches.