British designer Lee Broom has expanded his celestial lighting collection with a spherical design, launching at his showroom in New York during NYCxDesign.

The design is influenced by telescopic lenses. It combines a solid base with an acrylic dome, which is cut with crisscrossing lines to diffuse and refract the light from the LED inside.

Measuring 16 inches (41 centimetres) in diameter, Lens Flair can be used as a table lamp, or a pendant hung individually or in clusters. The base is available in brushed brass and matte black finishes.

Other items in the range include lights named Eclipse, Orion, Aurora and Tidal – all with shapes and effects that take references from the night sky.

The full Observatory collection is on display as part of an installation at Broom's Soho store, 34 Greene Street, which operates a permanent retail space following a pop-up that the designer just down the street. 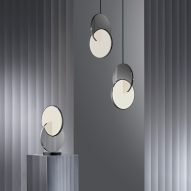 "I am excited to show our new lighting collection in New York, which is very special to me and a source of inspiration for many of my designs," said Broom. "NYCxDesign always has a great energy, and New York has become important to our business as we have seen rapid growth in the US since opening our permanent showroom in Soho."

The designer will also add to the Observatory series later in the year, when new pieces will be shown during London Design Festival in September 2018.

The NYCxDesign festival runs from 11 to 23 May 2018, with exhibitions and installations taking place citywide. They include a courtyard filled with rotating mirrors, a showcase of designer-celebrity collaborations and a display of work by only female designers. Check out our guide for more highlights.