British designer Lee Broom will present a range of outer-space-inspired lighting inside a listed building during this year's Milan design week.

Broom plans to showcase his new collection in a minimalist exhibition, called Observatory, inside a Grade II-listed building in Brera.

Encompassing four different designs, the range focuses solely on lighting – an area Broom describes as being fundamental to his studio.

"This year's launches see the focus return to lighting, which the brand is renowned for," said a statement from the studio.

"[It is] Lee Broom's most progressive work to date with new stellar-inspired designs playing with proportions of vertical and horizontal space, sculptural, spherical form, and the refraction and reflection of light."

Eclipse is available as a chandelier, table and wall lamp. All feature polished stainless-steel and acrylic discs, which create a soft diffused light. 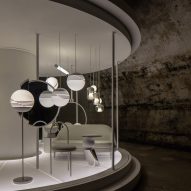 Orion is designed to be customised, with movable tube lights offering both horizontal and vertical compositions. Each of the tube lamps is connected by polished gold spheres.

Described by the studio as a "scalable chandelier", Aurora features rings of LED lights, while Tidal is a table lamp formed from polished chrome and acrylic.

"This new collection has been a fascinating journey for me," said Broom, who will be part of this year's Dezeen Awards judging panel. "I wanted to create a celestial collection of sculptural lighting, which is progressive and experimental, using the latest LED technology.

"Lighting is a fundamental part of my ethos as a designer and will always play a leading role in my work," he added.

Broom was named among the 500 most newsworthy forces in global design in Dezeen Hot List 2017. His studio celebrated its 10th birthday during last year's Milan design week, where the designer filled a carousel with products he had created over the past decade. 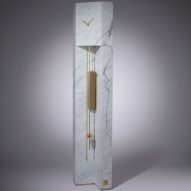 Observatory will be on show at Via Lovanio from 17 to 22 April.

After its stint in Milan, the exhibition will travel to New York in May for NYCxDesign and will be shown at London Design Festival in September.