Reels of paper and linen, sand pits and trees provide the setting for this display of Muji's homeware products, which Brooklyn-based Ladies & Gentlemen Studio has designed like a tranquil indoor garden.

Ladies & Gentlemen Studio installed the Materials Garden in the Japanese retailer's Soho store at 434 Broadway to coincide with this year's NYCxDesign festival.

The garden is made up of seven vignettes, each dedicated to a different material used in Muji's pared-back homeware. They focus on ceramic, glass, plastic, linen, wood, aluminium and water.

In each, Ladies & Gentlemen Studio have displayed the products from the minimal brand's range, along with an element of the material used to make them. 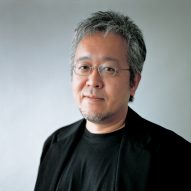 Muji is not just about minimalism and simplicity, says art director Kenya Hara

"We started to look at all these different materials across the spectrum of products that [Muji] offer," she continued. "It doesn't matter what type of materials they use, they always use it in a way that is very purposeful, is very beautiful."

Wooden markings divide each material section with stoney pathway cutting through the centre to lead onto the different sections.

Among these is glassware set on glazed shelvings embedded into sand, as a reference to the process of making glass by heating sand so that it turns into a liquid. Mirroring this, is a pit made of mounds of white polypropylene pelets that form the base for a stack of Muji's plastic shelving.

Ceramic is represented by stacks of white cups and saucers set atop clay blocks, in red, grey and green hues, with clay pebbles covered the ground beneath.

Opposite, a portion of stainless steel shelving unit is adorned with grey gravel and a melted metallic blob.

The brand's Aroma Diffuser provided the cues for the water portion, where the studio has built a device that heats water with a lightbulb.

At the rear, a wooden structure forms the frame from which reels of paper and cloth hang behind the linen and wood vignettes.

Piles of towels are stacked on a white bench in the former, while the latter features wooden homewares stored in a bench, sawdust flooring and two trees.

Launched to coincide with citywide NYCxDesign festival, Material Gardens is open to the public from 19 to 29 May 2018 during store hours at Muji's Soho Pop-Up Store.

The installation also celebrates the brand's 10-year anniversary in New York. Other events marking the milestone have included the opening of Muji's newly redesigned and expanded Soho store at 455 Broadway, just down the street from the pop-up.

Earlier this year, the company's creative director Kenya Hara discussed on the hugely popular Japanese retailer's aesthetic and its approach to products in an exclusive interview with Dezeen.