Canadian firm Burgers Architecture constructed this mountainside residence from prefabricated volumes so it could be quickly assembled between British Columbia's snow seasons.

Buckhorn Place is perched on a hilltop and protected by dense trees that envelop the property.

The lot sits in a restrictive view corridor, which dictated the house's siting close to edge of the street. The building has its back turned to the end of the cul-de-sac, allowing it to make the most of the views of Blackcomb and Whistler peaks from its glazed south facade.

The east and west sides of the three-storey home are clad in black metal and charred red cedar. The floor plates are rotated in relation to one another, creating a private entry corridor.

Based in Vancouver, Burgers Architecture designed the house using prefabricated elements and with passive house standards in mind.

"Prefabrication allowed for total precision and control in an environment where snow upwards of two to three metres annually limits construction duration to six months of the year," said the firm.

The roof, walls and floors were shipped to the site fully formed and flat packed, using two trailers, and the house was assembled in just one week. 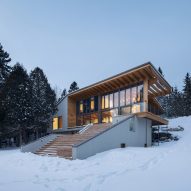 Quebec chalet by Bourgeois/Lechasseur steps down to a lake

Photovoltaic panels provide a portion of the electricity, and triple-pane windows with shades help to prevent solar gain. The roofing and north-facing walls are also clad in durable anthracite metal, designed with a slight pitch to shed snow away from the building.

Upon entering is an open-plan kitchen, dining and living area that enjoys the impressive vista through floor-to-ceiling windows, which lead to an outdoor patio.

Next to the main living area is a split-level stairwell, with a small bathroom and a den on the opposite side. Downstairs is another sitting room, along with two bedrooms and a covered outdoor spa. Upstairs are three bedrooms with ensuites and a study.

Vancouver-based Sophie Burke designed the interiors to be both bright and cosy, white and light wood that draw attention to the verdant natural landscape.

British Columbia's peaks are popular with skiers and outdoor enthusiasts, and many homes in the region make the most of the access to the landscape. Other recently completed houses in the area include dark house in Whistler with white interiors by Canadian firm Stark Architecture and a dark wood residence on concrete stilts by Hunter Office Architecture.