French architect Odile Decq has urged people to join her in a demonstration today at the Venice Architecture Biennale, to demand gender equality in architecture.

Decq is among a group of female architects, including Farshid Moussavi, Toshiko Mori and Benedetta Tagliabue, who are using the biennale as an opportunity to protest against discrimination in the industry.

"It's so important that women speak and say 'we are here'," Decq told Dezeen. "We have to care about the fact that women are not strong enough and not present enough. We have to fight against harassment, against discrimination, against everything."

The demonstration is set to take place in the Giardini, one of the two main biennale venues, at 11am local time. According to Decq, the format was inspired by protests at the recent Cannes Film Festival, where actress Asia Argento made a powerful speech describing the movie industry as implicit in sexual harassment and assault.

"In the beginning the idea was to do a panel," explained Decq. "But after I saw the Cannes event, I said it needs to be a stand-up."

"We have to speak up. We have to say publicly that we are all women, and we are all good architects, but we are too invisible. We need to change that."

The event will see Decq and others deliver a manifesto calling for fairness across the industry, "irrespective of gender, race, nationality, sexuality and religion".

The architect said her hope is to encourage women to be more confident and to speak up when they experience harassment or discrimination because of their gender.

She said that the recent allegations about architect Richard Meier highlighted a problem that is endemic across the industry. She revealed that she is also aware of harassment from other male architects.

"I know so many, but I can't say. Because I will not denounce them," she said. "I know so many male architects who are really taking opportunity of their position to do things to young women – we all know that."

Decq ranked at number 190 on Dezeen Hot List 2017. She runs the firm Studio Odile Decq, as well as Lyon-based architecture school Confluence Institute for Innovation and Creative Strategies in Architecture.

She is presenting two projects at the biennale: a representation of Phantom, the Opera Garnier restaurant, and a residential project in Barcelona called Antares.

She said that, in the past, she was uncomfortable playing the role of "the female architect". But she said she has now realised how important it is for women to become role models for the younger generation of architects and architecture students.

"We know that today, in schools of architecture, more than 60 per cent of students are women," she explained. "But we know that in the register of architects, all over the world, there’s less than 30 percent. And at the head of the office, less than 10 per cent." 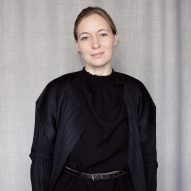 "This is really problematic – it means that 50 per cent are disappearing," she continued.

"The problem is that they’re not self-confident enough. They don’t believe that they can do it. They step back immediately when there is a fight. Doing architecture is a fight, and you have to be strong. You have to be able to stand by yourself and to take a position. And this isn't easy for women."

The event, called Stand Up For Women in Architecture, takes place at the Giardini at 11am local time. Decq encourages as many people as possible to attend.