Furniture brands who work with female designers shouldn't expect them to only produce feminine objects, according to Danish designer Cecilie Manz.

Speaking to Dezeen ahead of Milan design week, Manz said that women are too often commissioned based on their gender, not their portfolio.

"I know for some manufacturers it does play a role," she said. "They'll specifically ask for you because you're a woman and not dead."

Manz said she hasn't personally been affected by gender inequality, but she claims this is because she is upfront about the fact that she doesn't adhere to gender stereotypes.

"I've never experienced any specific pluses or minuses," she said. "But what I tell them from the beginning is that they shouldn't be certain that you’re going to get a wobbly pink shape – because that's not me."

Manz would not adhere to gender stereotypes

Last year's Milan design week featured two exhibitions focused on designs by women. The first, by Italian metal brand De Castelli, asked each designer to show how metal can be feminine. The other, by furniture brand Lago, featured interiors in "an ode to women's kindness".

Manz explained that she always has a clear conversation with brands about her role as a designer and what they can expect from her aesthetic.

"Look at my portfolio – if you like what I do, then you should ask me, not because I'm a woman," she said.

"We'll have this talk and they'll say it's fine, but I still think that they maybe have some marketing meetings where they think 'aah this would be great'. But so be it. I don't take it into consideration, I just do what I do."

Designs should reflect character of the designer

Over the years, Manz has created homeware designs for a variety of labels, including trestle tables held together by strips of leather for Menu and her well-known Caravaggio lamp for Fritz Hansen. 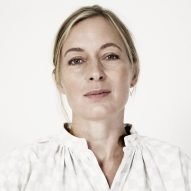 She is presenting a range of new products in Milan for this year's design week, including a speaker for Bang & Olufsen and a coffee table for Danish brand Muuto. She also recently unveiled a new wooden room divider as part of her Designer of the Year exhibition at this year's Maison&Objet furniture fair, where this interview took place.

Manz said that she always tries to create products that reflect the brand's identity, but also ensures her own personality goes into every design.

"When I work with a client, it's my responsibility to look at who they are, and – a word I don't like so much – their DNA," she explained.

"It should reflect their brand and who they are, but also me. They asked me, so I should have some space right?"

"Looking into different materials, textures, colours – all this is important in my work," she added. "I invest so much time in defining and finding the right materials to use in the right place, tuning colours and being a bit of a nerd."

Manz's comments feed into the ongoing discussion about gender inequality in the creative industries.

Her views echo those expressed by Danish architect Dorte Mandrup in an Opinion column on Dezeen last year. Mandrup suggested that the term "female architect" was reinforcing the view that women should be treated differently.

Dezeen recently conducted a survey revealing that just three of the world's 100 biggest architecture firms are headed by women. As a result, we launched an initiative called Move The Needle, calling on companies to improve diversity.