Portuguese architect Eduardo Souto de Moura has been awarded a Golden Lion for the best project on show at the Venice Architecture Biennale, while Switzerland has been lauded for curating the best pavilion.

Souto de Moura was named best participant in Freespace, the exhibition directed by Yvonne Farrell and Shelley McNamara of Grafton Architects for the 16th edition of the Venice Architecture Biennale.

His project Vo De Jour comprises two aerial photographs positioned side by side, showing the São Lourenço do Barrocal estate in Alentejo, Portugal, which the architect transformed from an old farm into a hotel. The two images show the site both before and after the works. The changes are barely noticeable, revealing how small-scale the interventions were.

Judges said the positioning of the two images "reveals the essential relationship between architecture, time and place".

Switzerland won the Golden Lion for best national participant. Its exhibition, titled Svizzera 240: House Tour, showcases the bland fittings commonly selected for new-build housing or rented apartments. These are either shrunk or enlarged, like Alice In Wonderland, to draw attention to them. 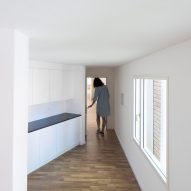 Judges called it "a compelling installation that is at once enjoyable while tackling the critical issues of scale in domestic space".

Great Britain received a special mention for its exhibition Island, which saw Caruso St John and Marcus Taylor build a wooden platform on top of the pavilion. Ahead of Brexit, the aim was to create a " place of both refuge and exile".

Judges said it was "a courageous proposal that uses emptiness to create a free space for events and informal appropriation".

Special mentions were also given to two other participants in the Freespace exhibition.

Indonesian architect Andra Matin was commended for his project Elevation, which was contained within a woven structure. Inside, it showcases the vernacular architecture of the Indonesian archipelago.

Judges described it as "a sensitive installation that provides a framework to reflect on the material and form of traditional vernacular structures".

The other commendation went to Mumbai-based architect Rahul Mehrotra, who used three projects to showcase the "inclusiveness, exchange and empathy" of society in India. They include an office featuring a "gardeners' catwalk", a housing project with open space for people and elephants, and a university library.

According to judges, the projects "address issues of intimacy and empathy, gently diffusing social boundaries and hierarchies".

A Silver Lion for the most promising young participant was also awarded to Jan de Vylder, Inge Vinck and Jo Taillieu from Belgium. Their project created new structures inside an old, half-demolished psychiatric clinic.

It was praised as "a project that possesses the confidence to which slowness and waiting allow architecture to be open to future activation".

The awards ceremony took place in Venice today, 26 May 2018, at the Venice Biennale headquarters. It marks the first day of the event, which continues until 25 November 2018.

The event also saw theorist Kenneth Frampton receive his Golden Lion for lifetime achievement, which was announced back in April.