More then 10,000 plants, including 65 different grassland species, form the installation Grasslands Repair, as part of an exhibition calling for a reassessment of the value of Victoria's natural landscape.

According to curators Mauro Baracco and Louise Wright, of Baracco+Wright Architects, only one per cent of the grasslands that existed at the time of European settlement, in 1788, now remains.

"Consequences of the disregard of natural systems are now being felt," they said.

The pair worked with artist Linda Tegg to create the garden, based on another installation she created for the Melbourne International Arts Festival in 2014.

It takes over the main space of the pavilion, but is interrupted by snaking pathways that allow visitors to weave in among the dense thickets. The plants also extend outside the pavilion, into the Giardini. 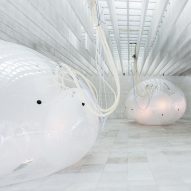 "Grasslands Repair continues the themes of Tegg's 2014 Grasslands installation in Melbourne, attempting to recreate the pre-European settlement grassy plains woodland that once occupied the site on which the State Library of Victoria now stands," said the curators.

"It aims to reveal what is at stake when we occupy land," they explained. "The area of plants exhibited is similar to that taken up by the pavilion. It is also a smaller area than that of an average Australian family house. Such an area takes around an hour to bulldoze."

To accompany the plants, the team have installed Skylight, a "life-support system" made up of LED lights, which will help the plants to survive inside the building.

They are also screening a series of 15 films on the surrounding walls, featuring architectural projects that explore the concept of repair.

The curators hope that the project will encourage architects to think differently about the relationships between their buildings and the natural world.

"The use of land for buildings is no small act," they said. "There is a role for architecture to actively engage with the repair of the places it is part of: the soil, hydrology, habitat, connections, overland water flow, microorganisms, vegetation and so on."

"This type of repair is critical to enacting other wider types of social, economic and cultural repair."

The exhibition is on show at the Australian Pavilion for the duration of the Venice Architecture Biennale, which opens to the public today and continues until 25 November 2018.

It becomes the fourth project shown inside the contemporary pavilion, which was built by architecture firm Denton Corker Marshall in 2015 to replace the temporary structure that Australia had been using since 1988.

Two years ago, the space was transformed into a swimming pool for the architecture biennale.