Architecture firm In Situ Studio needed to overcome rotting trim and crumbling brick mortar to renovate and slightly enlarge an American foursquare-style dwelling that had fallen into shambles.

The Nolintha Residence is located in Raleigh, the state capital of North Carolina. The clients – a brother and sister who are successful restaurateurs – hired local firm In Situ Studio to overhaul the 1920s red brick home designed in an American Foursquare style. Popular in the late 19th and early 20th centuries, the simple, boxy homes were known for their efficient layouts, with each floor typically containing four rooms.

The architects were tasked with creating a modern home with a shared living area and three separate bedroom suites, one of which could accommodate guests. The clients also wanted the dwelling to be suitable for large events.

"This house is our clients' first home, and the programme they presented was unusual – the renovation of a decaying, historic four-square to accommodate food-related events and provide three separate living suites," said the architects.

Complicating the project was the home's poor condition. On the exterior, certain portions of the brick mortar had turned into powder, and the trim was deteriorating. The walls were also rotting, due to water leaking through open mortar joints.

The interior was equally dilapidated. Over the years, the building had been divided into three apartments, with tenants sharing the bathrooms and kitchen. Odd measures had been taken to accommodate the multiple occupancies.

"The subdivision of space to make this possible was haphazard to say the least, and several suspect changes to load-bearing conditions had caused roof, ceiling and floor spans to rely on one another in eccentric ways," said the architects.

Because of the home's age, the team faced certain restrictions imposed by the Raleigh Historic District Commission (RHDC). The front elevation needed to remain largely unaltered, and any additions in the rear – which already had been modified in the 1970s – could not "distract from the historic structure".

In response, the team repaired the brick veneer and trim on the front and side facades. In the rear, brick was replaced with fibre-cement lap siding and new windows were installed. A small addition was made to the upper level, and a covered porch was created.

Inside, the home was completely gutted. Much of the interior wood framing was dismantled and rebuilt, which included "installing new structural members from the roof down to existing foundations and in areas of over-spanning".

The ground level was converted into an open, light-filled public zone, with views from the front half to the backyard. Two existing, non-working fireplaces were retained. One is situated in the centre of the floor and was converted into a unit for storage and support elements, while the other is located on the west wall and faces the dining room.

"The only elements remaining downstairs are the central and west wall fireplace masses, which would have been too destructive to the integrity of the structure to dismantle," the team said.

Along the east wall, the team created a new staircase that passes in front of original windows and arrives at a central hallway. Three bedrooms suites were placed upstairs – one for each sibling, and one for guests.

"These spaces are completely separate from one another, filled with light, and oriented towards beautiful views of the surrounding context and downtown Raleigh," the team said.

The home's basement was also modified. While it had remained dry and intact over the years, its edge band and adjacent floor joists had been ruined by water and insects. The below-grade space was refurbished and prepped for storage and mechanical equipment.

"New systems were located in the basement, which was cleaned out and reserved for storage," the architects said. "The finished house, once on the verge of being unrecoverable, now has another 50 years of service ahead."

Founded in 2010, In Situ Studio has completed a number of residential projects in its home state of North Carolina. Others include Ocotea House, which involved reviving a mid-century-modern home that had been significantly altered over the years. 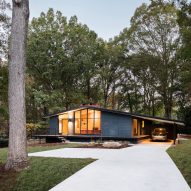