Comprised of chairs, low tables and high console tables, each piece in the Watercolour collection is designed to look as though it has been cut and folded by hand.

Each furniture piece features various blue, gradiated markings, designed to appear as if they have soaked naturally into the furniture, in the same manner as watercolour permeates paper.

To create the furniture steel frames and surfaces are repeatedly and thoroughly sanded, applied with primer and finished with matte white paint to mimic the appearance of paper.

Painted by hand, the bleeding effect is achieved by gently dabbing a mix of two tones of aqueous inks onto the objects with soft pulp paper.

Through a process of trial and error, each colour bleed was created to specifically suit the object it is painted on, in accordance to its shape and different elements.

"This production process allowed us the opportunity to play with animated colour effects: colour blends where there are meeting points, and stains and colour run down in a waterfall effect on overlapping parts of multi-layered objects," said Nendo founder Oki Sato.

The objects are then finished with a protective, clear matte layer that, according to the studio, further accentuates their flat, paper-like appearance. 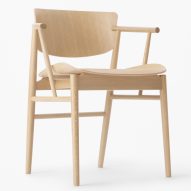 Some designs see sheets of steel folded in half to create chairs and seats and, while others see multiple-layered tables connected by their legs, which pass through "strategically placed" holes in the metal surfaces – described by Sato as an "intersection of ellipses."

Each two millimetre-thick surface is supported by thin, delicate 20 millimetre steel rods in a bid to create an "ethereal and transcendent" effect, and an "airy" appearance.

"This combination of function and a seemingly handcrafted technique has brought about eighteen new shapes that also offer new ways of use," said Sato.

"A single object has a single function, but by combining the furniture in different variations, we can create new relationships and interesting stories," he added.

The new furniture series will be presented by Friedman Benda at Design Miami/Basel – which will be held in Switzerland this year from 11 to 17 June – in an installation created by Sato.