Set to be released this Friday, 8 June 2018, the anticipated joint album comes just one week after the debut of West's album, ye – which was released on 1 June 2018.

Known for coining the term Superflat – a postmodern art movement influenced by the cartoon-like style of manga and anime – Murakami turns a traditional Japanese landscape watercolour into a psychedelic scene for the album's artwork.

The album cover contains shades of orange and pink that merge into blues and purples to colour a mountainous landscape scene, which sets the backdrop for two stark white figures: a strange flying creature and its human-like rider. 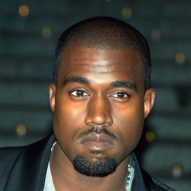 The hip-hop artist and producer retweeted the cover art yesterday from a post on Kid Cudi's account, which accredited the work to Japanese contemporary artist Takashi Murakami.

West had previously published a teaser of the art concepts for the album earlier this year in April, with the caption "Murakami vibes."

The rapper previously worked with Murakami to design the cover art for his 2007 Graduation album. The artwork features cartoonish teddy-bear creatures with a dark twist, to represent West's music that, according to Murakami, "scrapes sentimentality and aggressiveness together like sandpaper."

West is currently making moves into architecture. The hip-hop artist and producer announced last month that he was launching an architecture arm called Yeezy Home "to make the world better".