The first Serpentine Pavilion built outside the UK is a tunnel made out of arched steel beams, built by Chinese studio Jiakun Architects in Beijing.

The Serpentine Pavilion Beijing opened in the Chinese capital last week, marking the first time the pavilion has been located somewhere other than Kensington Gardens in London.

The structure is positioned outside WF Central, a shopping and hotel complex in Beijing's Dongcheng district.

It comprises a series of long, slender steel beams that are each stretched into the form of an arch by steel cables.

Jiakun Architects, led by architect Liu Jiakun, wanted the structure to resemble the figure of an archer, in reference to the teachings of  Confucianism – a Chinese philosophy that rejects the practice of all martial arts except archery.

"Although modern architecture in Beijing has developed a series of powerful techniques to fight the external forces of fierce winds and unpredictable earthquakes, the pavilion's integral structure aims – like the Tai Chi Master – to conquer the harshness of those forces with softness," said Serpentine Galleries.

Now in its 18th year, the Serpentine Pavilion is commissioned annually by the Serpentine Galleries. Usually an architect is chosen who hasn't built in the UK before, with previous iterations designed by the likes of Sou Fujimoto, BIG and Diébédo Francis Kéré. 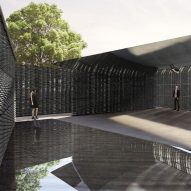 Jiakun becomes the first Chinese designer picked – with the exception of artist Ai Weiwei, who collaborated on a pavilion with Herzog & de Meuron in 2012, but was unable to leave China at the time.

He was selected by a panel that includes Serpentine Galleries directors Hans Ulrich Obrist and Yana Peel, and architect David Adjaye.

The pavilion will be open until 31 October 2018 and, like the London editions, it will host a programme of public events and activities. These include children's disco classes, cinema screenings and wellbeing workshops.

The Serpentine Galleries will also unveil a pavilion designed by Mexican architect Frida Escobedo in London next week. The building will comprise a latticed enclosure, containing a pool of water.

In a video series shot by Dezeen, former Serpentine Galleries director Julia Peyton-Jones revealed the stories behind all the pavilions created for the programme between 2000 and 2015.