On the 150th anniversary of Charles Rennie Mackintosh's birth, we continue our roundup of his most influential projects, by taking a look at the chair he created for the Argyle Street Tea Rooms.

While Mackintosh is best know for his architectural works, including the Glasgow School of Art, Hill House and House for an Art Lover, he also designed much of their decor and furnishings.

One of the most important figures in Mackintosh's career was Catherine Cranston – a patron who allowed him to showcase his talent as a designer and was appreciative of his all-encompassing approach.

Cranston was a Glasgow-based businesswoman with a passion for the arts, who came up with the idea of opening a series of tea rooms in the city with artistic interiors.

Having already established a successful tea room on Argyle Street, she invited Mackintosh to work alongside architect and designer George Walton on the interiors of a new premises in Buchanan Street in 1896.

The following year, Mackintosh and Walton collaborated again on the design of Cranston's Argyle Street Tea Rooms, with Mackintosh focusing on the furnishings.

It was the first major private commission of his career and an opportunity to implement some of his ideas regarding the use of furniture to create a feeling of enclosure and spatial separation within a room.

One of the pieces Mackintosh designed for the project was a high-backed chair for the Luncheon Room that aimed to held provide a more intimate dining experience for diners.

The Argyle Chair features long, tapering uprights that intersected with an enlarged oval headrest. The stylised shape of a swallow in flight was carved out of the headrest to lend it an artistic and emblematic quality. 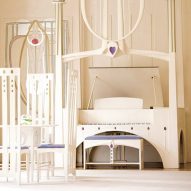 The chair's combination of simple and sculptural elements with an emphasis on natural forms echoed the ideas propounded by the Arts and Crafts movement, of which Mackintosh was an admirer.

Its extraordinary back legs are a complex piece of woodworking, with a form that starts off square at the base before curving and gradually tapering to become circular at the top.

The unusual height of the chairs meant that they formed a screen around the tables, creating the feeling of a room within a room. It was a technique that Mackintosh would explore and refine further in several of his later furniture designs.

In 1900, the Argyle Chair was exhibited at the Eighth Exhibition of the Vienna Secession in Austria, where Mackintosh's work was held in high regard and strongly influenced the work of the artists, architects and designers of the Wiener Werkstatte community.

Mackintosh would go on to design the furniture and interiors for several more of Cranston's premises, including the iconic Willow Tea Rooms. The pair remained good friends and he would eventually create the interiors for her Hous'hill in 1904.

Images are courtesy of the Museum of Applied Arts and Sciences, photography by Ryan Hernandez. Feature image courtesy of Glasgow Mackintosh group.

Perhaps Scotland's most famous architect, Mackintosh was born in Glasgow in 1868. A pioneer of modernism the architect, artist and designer created his own aesthetic by blending numerous influences from art nouveau to Asian painting.

During his lifetime Mackintosh had only a small number of buildings realised, with the majority of his major projects including the Glasgow School of Art, Hill House and Willow Tea Rooms all being built before he turned forty.

In later life he stopped practicing architecture altogether due to a lack of commissions, and concentrated on painting. Mackintosh died of cancer aged 60 in 1928.

Interest in Mackintosh has increased in recent years. In the 1990s two previously unbuilt houses – The Artist's Cottage and The House for An Art Lover  – were built from his plans.

There is currently a large amount of investment being made to ensure Mackintosh's legacy is preserved, with plans underway to restore several of his most significant buildings.

Along with the Glasgow School of Art, which is being refurbished following a fire in 2014, a £10 million renovation of the Willow Tea Rooms is nearly complete, and there are plans to conserve Hill house.

The Ingram Street Tearooms will also be seen by the public for the first time in 50 years when Kengo Kuma's V&A in Dundee opens in September 2018.