The Glasgow School of Art has rebuffed claims that a high pressure mist suppression system, removed before the Charles Rennie-Mackintosh-designed building was destroyed in a catastrophic fire, was largely intact.

The Times reports that a mist suppression system, which was almost completely installed at the building, survived a smaller fire in 2014 "largely intact" and "would have saved" the building if it had not been removed.

When the blaze ripped through the Glasgow School of Art (GSA) building on 15 June 2018 the historic building, which was still being renovated, had no mist suppression system in place.

"A fire protection system that would have saved the famous Mackintosh building was ripped out of Glasgow School of Art prior to last year's disastrous blaze," claimed The Times.

Architect Gordon Gibb, the director of professional studies at at the GSA, told The Times that the first system should not have been removed, particularly as it was 97 per cent completed and relatively undamaged by the first fire. 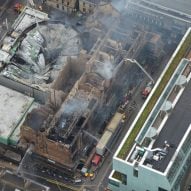 "The original tank was intact; the new system was being installed in a different location. Both could have been used in tandem," Gibb said.

"To rip out what was essentially an operational system in advance of construction work, which is the most dangerous part of a building's life, is in contravention of all relevant published guidance."

A spokesperson from the art school has rebuffed the claims that the 97 per cent complete mist suppression system survived the 2014 fire "largely intact".

"As a result of the 2014 fire considerable elements of the system were destroyed or damaged. The GSA sought expert advice which indicated that this system was unusable," it said. 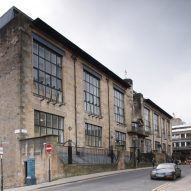 "As you would expect the GSA wanted to take advantage of improvements in the technology and install the best system for the building. The installation time for the replacement system in the post 2014 restoration would have been broadly similar irrespective of the type of system commissioned."

Pumps for replacement system were reported to have been delivered to the site but was not yet installed, leaving the A-listed building without fire protection during its restoration.

Debate over what comes next for the site is still raging, with many architects saying the building is too important to be lost despite the cost of another renovation.