US studio James Corner Field Operations has created a public park on the waterfront site around the former Domino Sugar Factory in Brooklyn, featuring a sunbathing spot, an industrial-style playground and a taco stand.

Opening this week, Domino Park comprises six acres (2.4 hectares) of parkland, stretching a quarter of a mile along the East River in Williamsburg, in front of the old red-brick factory.

The park provides an extension of River Street, which used to stop once it met Grand Street, to offer local residents a better connection to the waterfront. A new 1,200-foot-long (366-metre) esplanade now runs along the river, offering views of the bridge and the Manhattan skyline beyond.

Field Operations' landscape design for the park pays homage to the Domino Sugar Factory, which was built in the 1880s and was formerly the largest sugar refinery in the world. Over 30 pieces of salvaged factory machinery are integrated into a five-block-long section at the northern end of the site, called Artificial Walk. 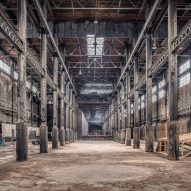 These preserved elements include four of the 36-foot-tall (11-metre) cylindrical tanks that once collected syrup during the refining process, 21 columns from the Raw Sugar Warehouse, and approximately 585 feet (178 metres) of crane tracks.

"We were deeply inspired by community input and the site's rich history when creating Domino Park," said Lisa Switkin of James Corner Field Operations. "The design will reconnect New Yorkers to the East River waterfront and foster interest in the history of the site and the surrounding neighbourhood."

More "passive" activities in the park are placed on the northern side, connecting with River Street, like an "urban beach" with deck chairs facing the water, a picnic area for 100 people, a Japanese-style garden and a food kiosk.

Artist Mark Reigelman also designed a play area for this stretch, spanning from South 2nd Street to Grand Street. Slides and tunnels connect the three elements of the play area: an elevated cabin clad in wood sourced from the factory floor, and two silo-like covered with a perforated metal panels.

Activities like a 1,750-square-foot (163-square-metre) dog run, two bocce ball courts, a sports field and a full-sized beach volleyball court are placed on the southern side near the Williamsburg Bridge.

Due to the park's close proximity to the waterfront, Field Operations has designed it to be resilient to flooding by raising the platform and planting nearly 175 trees.

Unveiled in 2013, the scheme also includes five buildings that will house 2,800 rental apartments – 700 of which are designated as affordable. Among these is 325 Kent – a 16-storey residential building with a large hole in its centre, which opened last year.

Domino Park opens to the public Sunday 20 June 2018, and will be accessible every day from 6am to 1am.

James Corner Field Operations has completed a host of large-scale landscape designs. Its transformation of a disused railway track in New York into the hugely popular High Line is among its most well-known, and triggered a number of similar infrastructure reuse projects to follow in its footsteps.

Photography is by Daniel Levin.