Norman Foster's snaking island resort in Singapore will provide the setting for the historic talks between US president Donald Trump and North Korean leader Kim Jong-un next week.

Taking place on 12 June 2018, the summit marks the first time that a North Korean leader has met with a sitting president of the United States. It is expected to mark the start of improved relations between the two countries, which have been strained since the Korean War in the 1950s.

The two leaders will meet at the British architect's Capella Resort on Sentosa – an island popular with tourists off Singapore's south coast – which was announced as the location in a tweet by the White House's press secretary Sarah Sanders.

Completed by the architect's firm Foster + Partners in 2009, the project involved building a hotel, villas, event spaces and a spa on the site of two 19th-century buildings. These were originally constructed as recreational spaces for military personnel occupying the small island.

The new build rises to the same height and extends from either side of the two historic, white stone structures – which are called Tanah Merah, the Malayan term for red earth – to form a loop that wraps around a dense garden in the middle. 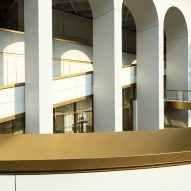 Foster + Partners fronted the structure with a "unifying skin" of earth-toned balustrades to match the hues of the existing building's terracotta roofs.

The screens offer shade to walkways placed behind and are among a number of elements in the design that take into consideration the regoin's humid tropical climate. These also include the roof, which extends over the facade to offer protection from rain, and features a curve to help drain water.

More than 5,000 trees are planted around the serpentine-shaped extension, including across the gardens in the centre. The vegetation also extends at the rear, where villas are arranged in three curved lines divided by a series of swimming pools.

Following the meet-and-greet Singapore summit at the resort, Trump is expected to invite Kim Jong-un for a follow-up talk in the US, with ambitions to come to an agreed timetable for North Korea to give up its nuclear weapons.

Foster + Partners was founded in 1967, and was placed at number 9 in the 2017 Dezeen Hot List of the world's most newsworthy forces in design. Recent projects unveiled by the firm include a Hong Kong hotel set inside former government headquarters and a new headquarters for the BBC in Cardiff.