American studio MW Works has designed a compact cabin in a Washington forest with exterior walls clad in weathered cedar and blackened cement.

The cabin called Little House is located in Seabeck, a waterfront village and former mill town in Washington. It sits within a forest on a bluff overlooking Hood Canal, a natural waterway that is part of the Puget Sound.

Seattle-based studio MW Works built the holiday home for clients from Houston who have spent many summers in the area, visiting family members on a nearby property.

"They loved the wildness of the southern canal and imagined a small retreat here of their own," said MW Works in a statement.

Rectangular in plan, the cabin was built atop an existing foundation that measured 20 by 20 feet (six by six metres). The team sought to create a compact dwelling that was efficient and relatively easy to build. 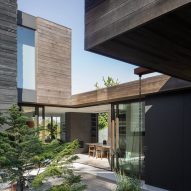 "The small footprint ultimately served as an effective tool to govern the design process," said the architects. "Focus was placed on the essentials, and extras were edited out by both desire and necessity."

Envisioned as "a simple box with large carved openings", the cabin rises two levels and encompasses 1,140 square feet (106 square metres). Exterior walls are wrapped in cedar – which has been oxidised to speed up the material's aging and turn it black – and blackened cement panels.

On the north and west facades, stretches of glass provide a strong connection to the natural landscape. The other sides of the cabin were left mostly opaque in order to shield views from the driveway and neighbouring properties. On the south elevation, the team incorporated a nook for storing firewood.

The cabin is approached on the south, where a thin canopy shelters a porch and marks the front entrance. Another terrace, located in the northwestern corner of the home, reaches out toward the landscape and "serves as a jumping off point to the trail system wandering down to the water's edge".

Inside the dwelling, the ground level contains a mudroom, a kitchen and an open-plan living and dining area. Floor-to-ceiling glass offers views to the north of the water and the mountainous terrain. Upstairs, the team placed two bedrooms and a shared bathroom.

To warm the interior, walls are clad in lightly painted medium-density fibreboard (MDF) and pine plywood. In the upper level, skylights bring in daylight and offer evening views of the starry sky. Overall, the compact dwelling is intended to feel more spacious than it is.

Founded in 2007, MW Works has completed a number of notable projects in its home state of Washington, including a holiday home wrapped in glass and weathered cedar and the transformation of a century-old barn into a family retreat.