David Kohn Architects and Nord Studio have won a competition to design a residential block in Berlin with a zigzag profiled facade.

London-based David Kohn Architects and Berlin-based Nord Studio collaborated on a design for Lützowufer Berlin, which draws inspiration from the links between German and British architectural culture.

The 75-home apartment block, for developer Euroboden, will be seven storeys tall. Its defining features will be a facade of angular bay windows forming a zigzag profile, clad in terracotta tiles and pressed metal panels. A grouping of three large bays will mark the building's communal entryway.

"The project has allowed us to explore issues that have long preoccupied us: making generous domestic interiors, ensuring delight in shared spaces is plentiful and contributing to the wider city," architect and founder David Kohn told Dezeen.

"Having been so inspired by the immediate surroundings, we hope that the project will do justice to such a remarkable location."

Positioned near industrial buildings from the 19th century and postmodern housing, the development is designed to respond sensitively to its context. 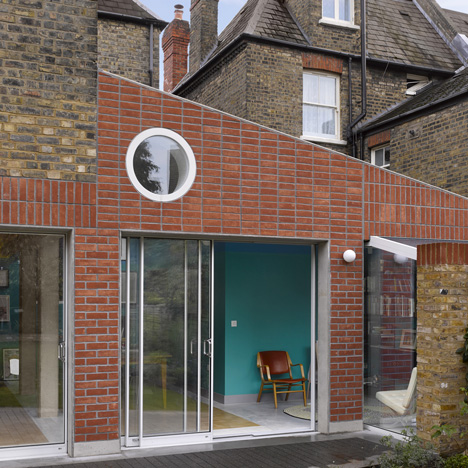 Another reference the design team drew upon was architect Herman Muthesius's 1905 publication Das Englische Haus, which explored the typologies peculiar to English homes, such as bay windows, particular silhouettes and inglenooks (recessed corners for chimneys).

Many of the apartments will have open fireplaces, while the communal rooftop garden area will be punctuated by terracotta tile-clad chimneys and rooftop lanterns.

The roof profile will create a silhouette that mirrors both the chimney of a nearby factory, and the profile of Burghley House, a sixteenth-century country house in England renowned for its ostentatious profile that the architects also cited as a reference for their design.

When complete, the block will have a range of studio apartments, garden maisonettes, two and three bed apartments, and penthouses.

David Kohn Architects is one of nine architecture studios creating a purpose-built design district on the Greenwich Peninsula, in London. Other projects by the studio include a house extension elsewhere in the capital, in the shape of a fox.