Belarusian designer Andrey Avgust has turned American banknotes 90 degrees and created graphics for the new format, in this conceptual take on the country's currency.

The New US Dollars series would be made up of translucent layers of flexible plastic, making them more hardwearing than the current cotton-fibre paper notes, like the new £5 and £10 notes for England.

They are also intended to bolster the currency's security and make it more difficult to counterfeit. Visuals show a random assortment of numbers and letters glowing across their surfaces in the dark.

With the orientation flipped from horizontal to a vertical, Avgust's contemporary alternative also follows the recent redesigns for Canada's $10 bill and Northern Ireland's banknotes.

This switch offered the designer the opportunity to create new visuals to replace the current green-hued imagery.

His suggested alternative is a set of muted blue- and grey-coloured notes, which accompany monochrome portraits of historical American figures. 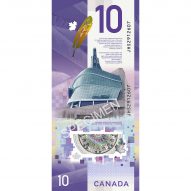 While the existing currency mainly features buildings, Avgust's designs bring in other recognisable imagery associated with the USA.

For the $100 note, he has paired The Liberty Bell – an iconic symbol of American independence – with Benjamin Franklin, who is recognised as one of the founding father of the United States.

Ulysses S Grant – the country's 18th president – is accompanied by the star-spangled banner on the $50 bill.

An image of American astronaut Buzz Aldrin is placed on the reverse of the $20 bill. The translucent layers allow him to be seen from its front behind a portrait of 35th president John F Kennedy.

The back of the $10 bill features the White House, which is the only image left in a horizontal format.

The Statue of Liberty and Abraham Lincoln feature on the $5 note, and the $1 aptly features the country's first president George Washington. On the reverse side is the Great Seal of the United States, which bears the country's motto: E pluribus unum – translating from Latin to Out of many, one.

Redesigns for money offer a visual exploration of cultural, as seen in a set of 26 coins that One Rise East imagined as an alternative to the collection released by the UK's Royal Mint.

Meanwhile, currencies that have received a real refresh recently include Norway's banknotes, with graphics by architecture studio Snøhetta.