Designer Porky Hefer has created a series of oversized beanbags and hanging chairs to resemble different animals under threat in the wild.

The Endangered seating collection includes an orangutan, a pygmy sloth, a polar bear, a great white shark and a blue whale – all of which are listed as vulnerable or endangered by the World Wildlife Fund.

The range was commissioned by art consultants SFA Advisory for the Leonardo DiCaprio Foundation, which seeks to safeguard animals in their natural habitats, and debuted at this year's Design Miami/Basel fair.

Visitors were encouraged to sit on, and interact with, the seats in attempt to "ignite a sense of empathy [for] the stories of the real animals' hardships and the importance of their survival".

Each piece has also been made using sustainable materials, which both Hefer and the foundation hope will start a wider conversation about the impact humans have on the environment. 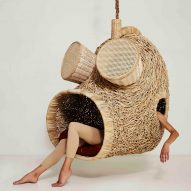 Polyester made from recycled plastic bottles was used to stuff the polar bear and orangutan bean bags, the latter of which is covered in brown and orange woollen tassels.

The whale-shaped hanging chair, which is finished with white-fringe teeth and blue patchwork skin, has also been knitted with reused t-shirts. The same material was used for the sloth, which is suspended from a corduroy and steel frame intended to resemble a tree branch.

"It's the future of the next generation that I am concerned about and the state of the world they inherit," said Hefer in a statement. "Looking after our animals and earth is one thing, but also the preservation of human skills, crafts and traditions."

"I think it's important to show what beauty humans are capable of with their hands rather than the destructive mass production that technology is driving the modern consumerist society towards," he added.

The latest edition of Design Miami/Basel took place at the Messe Basel exhibition centre in the Swiss city from 12 to 17 June 2018.