Called Fabric Formula, the collection features a series of white-glazed teapots, jugs and cups, which appear smooth on one side and scrunched on the other.

The product design graduate made the ceramics using a mould with one side made from fabric so that clay would appear partially unmoulded. The texture of the fabric against the outer surface of the clay also created a grainy finish.

"I used the fabric as the catalyst for the purpose of the showing the unique and imperfection beauty bought by textile in mass production," Zhang told Dezeen.

"By casting with the fabric, the user eliminates the inherent impression of the consistency of the shape of objects produced by a mould and feels a visual and tactile illusion brought by the technical sense of the fabric itself in mass-produced products," he continued. 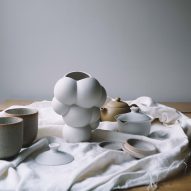 The designer began by inserting a piece of fabric into a mould for casting so that when the slip was poured into it, the liquid would attach to the inner wall to form an uneven surface. Due to the unpredictability of the fabric folds, each ceramic is unique.

"The handicraft sector in many industries is rapidly being replaced by machines," said Zhang. "Industrialized high-efficiency production methods have reduced instabilities of manual manufacturing."

"Some of the uncontrollable factors of handicraft create unique attributes for each product itself," he explained. "How to combine handicraft imperfection and the standardization of industrial production is my theme."

Fabric Formula is on show at the Royal College of Art as part of its annual graduation show between 23 June and 1 July.  Also being exhibited are pieces from the fashion masters courses, including conceptual space wear and crystal accessories made from human sweat.

Elsewhere, postgraduate designers from the Royal College of Art and Imperial College London developed a set of tools that inform animals of potential human threats.