The Blue House, home of Frida Kahlo, has been partially recreated inside the V&A museum in London, for an exhibition of the artist's belongings.

Architecture studio Gibson Thornley and set designer Tom Scutt have recreated a series of simple fragments from Kahlo's Mexico City home, as the setting for the exhibition Frida Kahlo: Making Her Self Up.

These include her bed, the temple in her garden and the fabric from one of her dresses.

Matt Thornley, co-director of Gibson Thornley, told Dezeen the aim was not to duplicate parts of the house, but to instead create subtle references to both its architecture and it contents.

"Rather than physically building bits of architecture, we wanted to make cases and archways that are like an architectural construct," he explained.

"We were also keen to avoid creating a pastiche of Mexican culture," he said. "We wanted to do something that was inherently modern and inherently linked to her."

Rather than focusing on Kahlo's artwork, the exhibition aims to tell the story of her life and character, by showing photographs and letters, as well as personal items such as clothing and jewellery, and medical objects including braces and crutches.

"One of the things that we wanted to do was really talk about the duality of Frida – that she has European ancestry but was Mexican, that she was seen as this incredibly strong outward icon, but was actually incredibly fragile," added Thornley.

The show begins in a tunnel-like space, containing a series of arches that gradually decrease in size. These rectangular arches are embellished with geometric patterns, referencing the pattern of a Tehuanan dress from Kahlo's wardrobe.

They frame a view at the end of the space, of a display case containing two mannequins holding hands. One figure wears modern European clothing, while the other wears traditional European dress, referencing the artist's painting The Two Fridas.

However unlike the painting, the backdrop to these figures is a vibrant blue structure that emulates the walls of the Blue House. Meanwhile the ceiling overhead is a contrasting shade of vivid orange, which is the colour of an Aztec temple in the building's garden.

"We wanted to try and create this kind of vista at the end," said Thornley. "Within her garden there is this amazing pre-Columbian Aztec temple, so we were trying to make it really low-key."

Another key space in the exhibition contains six replicas of Kahlo's bed, which function as display vitrines.

"We went to Mexico and measured them up, then abstracted them. The idea is that each one is slightly different," said Thornley. 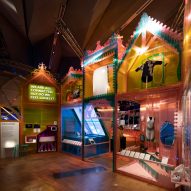 They are filled with items Kahlo used in relation to her medical conditions – she was diagnosed with polio as a child, suffered a nearly fatal accident in her teens, and had to have her toes amputated from gangrene. Examples include specially made footwear and painted corsets.

The backdrop to the space is huge photograph of Kahlo lying in her bed.

The final room in the exhibition contains "a mirrored incarnation" of the temple from the Blue House, this time created in glass. It contains more mannequins, wearing Kahlo's dresses.

On the surrounding walls are photos and artworks that show the artist wearing these garments.

This room also contains a second display case, containing a final figure wearing a ceremonial headdress. But unusually this figure is facing away from her audience, towards a mirror at the rear.

"The idea is that she is facing away from you, so you only see the image of her as a reflection," added Thornley. "It's a different view than you would usually be presented with."

Frida Kahlo: Making Her Self Up is on show at the V&A until 4 November 2018. The show is curated by Claire Wilcox and Circe Henestrosa.