A presentation by Cambridge Analytica, portraits generated from DNA and a Facebook drone sit beside each other in a new design exhibition that opens to the public this weekend at London's V&A.

The Future Starts Here marks the first time the influential museum has dedicated a display to the topic of the future. It is also the first major exhibition produced by the V&A's Contemporary Architecture, Design and Digital team.

The exhibition features more then 100 designs of today picked by curators Rory Hyde and Mariana Pestana because they suggest what our near future might look like.

Some of the objects come straight from recent news headlines, including the iconic pink pussyhat from recent protests in the USA and a video showing how Cambridge Analytica used personal data to target advertising.

"I like to think of the show as presenting what I sometimes call probable futures against possible futures," Pestana told Dezeen.

"Probable futures would be those that have the financial backing of large corporations, for example, and that have the advantage of being spread very quickly in the digital age."

"Possible futures would be those that are produced from the bottom up in a specific context for a specific people, continued Pestana.

"Something we're very interested in doing in the show is saying 'well here's a probable future, this is what you might expect the future to be and who you might expect to design it', but here are also some alternatives." 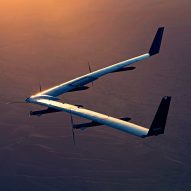 Pestana hopes that, seeing the possibilities side by side, audiences feel engaged with the issues and empowered to take action themselves.

"Hopefully that's an encouragement for the public to understand their own value, as citizens, as crowds of people that can adopt or co-opt a project," said Pestana, who outside of the V&A is a co-founder of design studio The Decorators. "It's a hopeful exhibition."

Visitors to The Future Starts Here will encounter the objects displayed across four zones, each dedicated to a different theme in tech — self, public, planet and afterlife.

The design for these zones is by Spanish architect Andrés Jaque's Office for Political Innovation, whose colourful, narrative approach gives the exhibition its distinctive saturated look.

Most of the zones are built out of rainbow-hued, brightly lit panels of polycarbonate plastic. Pestana describes them as "contemporary dioramas", with the "self" zone fashioned like a house, and public-themed zone having a more open, plaza-like look with flagpoles reminiscent of the United Nations.

A series of eight overarching questions guide visitors on a critical journey through the zones. "What makes us human?", "Who wants to live forever?", "Does democracy still work?" and "Is Edward Snowden a hero or a traitor?" are among the prompts.

Accompanying wall text distills objects down to their essence with titles like "A camera that decides when to shoot", alongside Google's Clips and "A thermostat that learns your schedule", to describe Nest's Learning Thermostat.

The 1,100-square-metre Sainsbury Gallery, built for the V&A's blockbuster shows, is column free — making it possible to hang an object like Facebook's Aquila drone, with its 40-metre wingspan.