Atelier Chang has designed a sequence of brightly coloured tents for the SJCC Glamping Resort to offer tourists a luxury camping experience on a cypress-covered mountain near the South Korean city of Suncheon.

The 16 brightly pods are oriented to enjoy views over the Suncheon Ecological Bay, which is located around 300 kilometres south of Seoul on the southern coast.

The glamping tents at the SJCC Glamping Resort are designed for would-be campers who want to be close – but not too close – to nature.

Plumbed and wired into the mains, tourist can enjoy cooking in their pods, as well as dining at an on-site restaurant.

"We wanted guests to feel as if they are living deep in the forest – directly in touch with the natural environment rather than being disconnected from it, as is the case with many 'destination' resorts," said Soohyun Chang, the founder of London- and Zurich-based practice Atelier Chang.

A double layer of fuchsia, lime-green or pastel-blue fabric is stretched over steel frames to create the pods, making them insulated enough to be inhabited year round.

Temperatures in the region plummet to minus 15 degrees celsius in winter and soar to 40 degrees in summer, and the chamfered and curved forms of the structures are designed to help resist wind and snow loading.

Each pod is affixed to a wooden deck that is raised on piles above the terrain to minimise impact on the site.

Inside, the 50-square-metre floorplan has space for two beds in a mezzanine arrangement, as well as an open-plan lounge and kitchen, and a bathroom.

The clubhouse and restaurant makes use of the same steel and fabric construction techniques, and has a zig-zagged facade of white steel louvres that open onto a terrace facing down the mountainside. 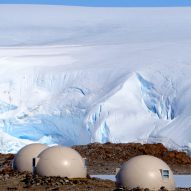 The shell of each structure was completed for approximately £15,000.

Chang was already creating glamping tents when she was approached by the steel company to come up with designs for an alternative resort that would appeal to younger travellers.

"They wanted to do something that was a bit more alternative for the city of Suncheon," Chang told Dezeen.

"Suncheon is a very beautiful city but they just don't have enough accommodation for people to stay for a long time," she continued."They thought it would be a great idea to launch something that was an alternative resort."

The popularity of glamping has been gathering momentum in recent years. Once the reserve of flush festival-goers, luxury camping has started to take root in the hospitality industry.

In 2014, ArchiWorkshop created a group of worm- and doughnut-shaped glamping tents for a remote campsite in Yang-Pyeong. Proving the success of its model, the South Korean practice went on to create another glamping site near Seoul just a couple of years later.

Chang now plans to bring her glamping model to the UK, where hoteliers like Soho House have already made successful forays into luxury rural retreats.

But she believes the lifespan of her glamping tents – up to fifty years with a fabric reskin every decade – could also find a spot in the housing market.

"I think housing is a great market for it," Chang told Dezeen."The lifestyle of 'mini living' is something valuable for us to take on as a permanent lifestyle, not just a temporary lifestyle."

"For millennials like you and I, I think we would be willing to take a bit less space in our bedroom to get more space in our garden. It's not about about having a house full of marble floors or golden faucets for us," she continued.