The 25-piece Shape of a River collection, which comprises chairs, lamps, stools, vases and consoles, was presented by New York gallery Salon 94 Design at Design Miami/Basel earlier this month.

Lee, who studied metal art and design at Hongik University in Seoul, has perfected the ancient enameling process, which dates back to the 15th century and involves applying wet or dry crushed coloured glass to copper sheets.

The pieces of copper are baked in an oven called a chilbo – a traditional Korean kiln that creates intense heat. The name chilbo translates roughly as "seven colours of gem".

As the heat moves across the copper a shimmering effect is created on the copper's surface that resembles the reflective nature of water. It is this unpredictable watery patina that gave the collection its name: Shape of a River.

Due to the small size of the chilbo furnace, it is possible to open the door and check on the changing colours throughout the firing process. 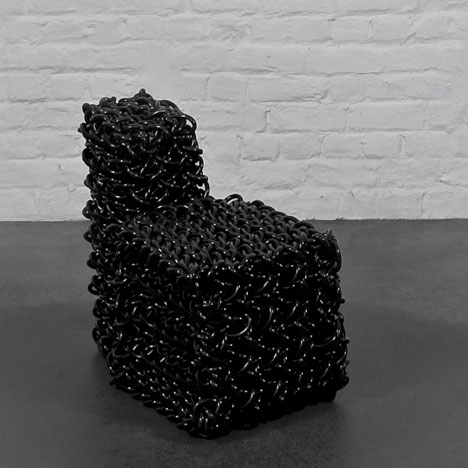 Lifelike Design by Kwangho Lee at Hunting and Collecting

The industrial sheets of copper are joined together under intense heat.

"The only thing I intended on was leaving the welded edges of the piece as is," said Lee, who wanted to create a raw finish. "Normally, one sands them down for a smooth surface, but I kept the welded trail."

The panels are then inlaid into the cherry wood frames to create grids of vibrant colour.

Lee has been experimenting with the ancient technique since 2010 when he launched a line of enameled copper furniture for Johnson Trading Gallery. In the past, he has also created furniture and lighting woven from garden hoses and electrical cables, and cut furniture from polystyrene foam with a hot wire.

The Shape of a River collection was presented at Design Miami/Basel, which took place at the Messe Basel exhibition centre in the Swiss city from 12 to 17 June 2018.