Hitomi Hosono explains how she combined British and Japanese aesthetics to create a collection of ceramics for Wedgwood in this video Dezeen filmed at their factory in Stoke-On-Trent.

Hosono, a ceramicist from Japan known for intricate porcelain pots featuring botanical decorations, designed the collection in collaboration with Wedgwood, after being invited to take part in the brand's artist in residence program.

The collection is comprised of vases, bowls and ornamental boxes in an unglazed matte finish typical of Wedgwood's signature Jasperware – a kind of stoneware developed by the brand's founder Josiah Wedgwood in the 18th century.

Jasperware products typically employ relief decorations of human figures and natural forms known as sprigs, which are cast in clay molds and added to the pots.

"Sprigs are like thin leaves made of clay," explains Hosono in the interview. "I chose jasper sprigs from Wedgwood's archive and applied them in a new way on the pots, with a Japanese aesthetic."

While Wedgwood's vases normally combine botanical imagery with figures from classical mythology, Hosono chose to foreground nature in her work with the brand. "For this project, I wanted to take nature itself and give it a main role on the pieces," she says. 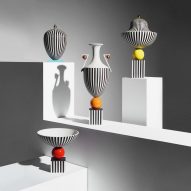 "In Japanese aesthetics, things are placed as they exist in the natural world," she claims. "When you see the flowers, they're overlapping, or look like they're falling. There's more movement."

The ceramicist first came into contact with Wedgwood after working for them as an intern during her time as a student at the Royal College of Art in London in 2008. "The biggest inspiration working with Wedgwood was looking at the archives, and this deep history making art pieces," she explains.

Wedgwood has been challenging its reputation as a traditional brand by collaborating with artists and designers to reinterpret its archive.

Hosono's collaboration with the brand follows a project between Wedgwood and Lee Broom, who created a collection of postmodernism-inspired ceramics for the brand last year.

"I think they're a traditional brand, but now they're very willing to collaborate with new creativity, and they're very open to new ideas," Hosono claims.

Wedgwood was founded in 1759 by craftsman and potter Josiah Wedgwood. The brand has become known for its fine bone china dinnerware, tea ware and iconic Jasperware pieces, and has previously collaborated with designers including Vera Wang and Jasper Conran.

The collection will be on show at art dealer Adrian Sassoon's stall at the Masterpiece art fair in London from 28 June to 4 July.