Abloh, who was appointed artistic director of menswear for Louis Vuitton in March 2018, showcased his inaugural collection at the Palais-Royale gardens on 21 June 2018, during Paris fashion week.

Models dressed in mohair suit jackets and crocodilian leather harnesses walked down a hand-painted, 200-metre-long rainbow runway – or "gradient painting" as Abloh calls it – inspired by the dream-like land in the Wizard of Oz.

The show set the groundwork for Abloh's new design vocabulary, which places diversity and inclusivity at the forefront.

It included models from every continent in the world, except Antarctica, while also alluding to the LGBT Rainbow Pride Flag with its multicoloured catwalk.

Abloh wrote an A to Z "dictionary" of terms related to his collection to accompany its release, each with his own definition of the word and an explanation of the idea that was born with it.

Titled "The vocabulary according to Virgil Abloh", the document selects Rainbow for R, for example.

It defines the word as "a kaleidoscopic palette evolving from off-white to polychromatic, synchronously forming a holographic archway known to represent dreams. A motif in The Wizard of Oz, which provides construct to the Spring-Summer 2019 collection."

This definition – and other words such as "Psychedelia" and "Tie-dye" – hint at the origins of both the fashion and the "prismatic" runway, which set the scene for the 56-look collection aptly named Colour Theory.

The highly anticipated show opened with a stream of crisp white tailored suits, paired with loose-fitting trousers and trainers that stood out against the "kaleidoscopic" background, before introducing bolder colours in every shade of the rainbow.

Each model walked to the beat of a "psychedelic jazz intro" by BadBadNotGood, which faded into Kanye West's song I Thought About Killing You from his newly released album, ye. 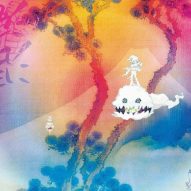 As a friend of West's, and his former creative director, Abloh's references to psychedelia can also be found in the hip-hop artist's new album artwork designed by Japanese artist Takashi Murakami, who was sat in the audience at the show next to West.

Featuring shades of orange and pink that merge into blues and purples as the backdrop for two stark white figures, the cover art shares similar visuals to the show – particularly its opening.

Abloh's A to Z dictionary of terms was included in an information pack placed on each seat, which also contained a map of the world marked with dots that pinpoint the birthplace of each of the models, as well as the birthplace of their parents.

Titled We Are the World, the map makes reference to the charity single written by Michael Jackson and Lionel Richie in 1985 in support of African famine relief.

Abloh wrote in an Instagram post of the map that "a global view on diversity linked to the travel DNA of the brand" was essential to his show concept.

These t-shirts, which doubled up as invites, were worn by the thousands of students that Abloh invited to the show to view the new collection, further hinting at his emphasis on inclusivity.

"Like some kids today I started the surreal mission without 'fashion school', but [with] a blank t-shirt, a screen printed idea for it, and a dream," explained Abloh in an Instagram post.

"As a nod to that, on every seat is a graphic t-shirt I made [in] the early days at Louis Vuitton once I learned how to use the photocopier in the office," he continues.

Abloh's was not educated at a fashion school. He earned a civil engineering degree from the University of Wisconsin in 2002, and an MA in architecture from the Illinois Institute of Technology in 2006.

He was creative director for West before launching his first label, Pyrex Vision, in 2012, and establishing Off-White a year later.

Abloh's recruitment into Louis Vuitton as men's artistic director makes him the first designer of colour to hold such a high-ranking position at the fashion house.

The American designer makes a point of not claiming the title of a designer: "I don't call myself a designer, nor do I call myself an image-maker," he writes in his dictionary.

"I don't reject the label of either. I am not trying to put myself on a pedestal, nor am I trying to be more, now. I would like to define the title of Artistic Director for a new and different era," he continued.

Abloh's recent collaboration with IKEA also saw him aim his design at millennials, with slogan-covered rugs and a cabinet for storing and displaying sneakers.