Sinae Kim, a graduate from Central Saint Martins in London, has created a collection of decorative ceramics using urine as the glaze.

Called Urine Ware, the collection features a series of ceramic vessels inspired by the shape of the human bladder and laboratory flasks, which Kim has glazed using human urine.

The Material Futures masters graduate made the collection to pose an alternative use for urine, which is commonly considered a waste product.

Kim believes that urine can be used as a sustainable alternative to glaze in the ceramics industry, which normally uses metal oxide glazes that have the potential to cause metal poisoning.

"This project is an experimental journey, exploring the value of urine, and presenting a potential new role in this society," said Kim.

"Throughout the research, I found out, unlike the common belief shared in modern society, urine was widely used for many purposes in pre-industrial society, such as planting, cleansing, therapeutic medicine, whitening teeth and tanning leather," she explained. 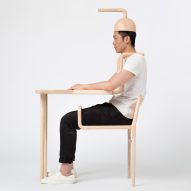 To create the items, Kim collected and recorded 280 litres of human urine from five people over a period of five months. This was then distilled through evaporation, which resulted in a residual paste in a dark orange-brown colour.

"The minerals in urine can play the same role as glaze or clay since they have common minerals such as Iron, Calcium, Sodium, Potassium and Magnesium," explained Kim.

Kim crafted vessels out of clay and coated them in the urine residue, which reduces the melting point of the silica in the clay. When heated, the silica merges with the minerals in the urine, creating a glossy coating.

"Human urine is an absolutely promising material in the future where an enormous amount of urine is produced by rapidly growing population," she explained.

"The common minerals also survive and remain in a crystal form under high temperature, so they have the potential to be used for creating objects like vessels."

Urine Ware was on show at Central Saint Martins as part of their annual degree show. Other graduate projects include a set of tools that inform animals of potential human threats and a ceramic tea set made using fabric moulds.