A sea of beckoning cats feature in this installation by Central Saint Martins graduate Katie May Boyd.

Called Foreign Garbage, Boyd – who studied the Material Futures masters course – moulded the cats out of waste plastic she collected from Central Saint Martins over a period of nine months.

She wanted to create an installation that would draw attention to the inefficiency of plastic waste recycling and chose to focus on a Japanese Maneki-neko cat as a symbol of a mass-produced object that is commonly made in China.

According to her research, Boyd found that 30 per cent of waste from the UK was sent to China until March 2018 when China enacted a ban on foreign rubbish.

This created problems in the UK as the country does not have the domestic infrastructure to dispose of large quantities of waste and had previously relied on China for these purposes. 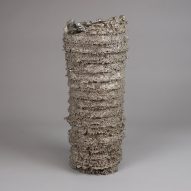 Boyd's project focuses on the disposal of expanded polystyrene by creating an alternative recycling process to make deflated polystyrene.

"Expanded polystyrene is solely used for packaging, so the root of the problem is in fact about an excess of buying rather than an excess of waste," she said.

"By taking a product that is symbolic of 'Made in China' manufacturing and making it with the waste that was intended to be sent to them, we can start to question the status quo around how we treat materials like plastic and start to think of the absurdity of shipping these products around the globe," she continued.

To create the beckoning cats, Boyd dissolved the waste plastic using a chemical dissolution technique before recasting the plastic in a mould.

Boyd chose to dissolve the material because common methods of recycling – requiring melting to form sheets and then cutting out forms – create waste.

"The great thing is that the resulting deflated polystyrene is circular and can go back into the process to be moulded time after time," she told Dezeen.

"The process doesn't use any heat or pressure, which I wanted to stay away from to avoid the common practice of recycling by just melting things down into sheet material, which then needs to be cut, creating more waste," she explained.

Waste is increasingly explored and discussed as a design topic. Earlier this year, Spanish designer Adolfo Correa created a Hawaiian shirt made from recycled plastic, while Adidas has continued its collaboration with environmental initiative Parley for the Oceans by creating a Manchester United Football Club kit from recycled ocean plastic.