New York designer Anna Karlin has given a print shop in the city, which was ruined in a fire, a new life as her studio and gallery, decorated with rough plasterwork, Shaker-style furniture and bulbous lamps.

Karlin runs a small design team – working across a range of disciplines like furniture, lighting and jewellery – from the space in Manhattan's Lower East Side neighbourhood. Located at 108 Eldridge Street, the two-storey workplace features a showroom and studio on the ground floor, and workshop in the basement.

The designer and her team undertook an extensive renovation project, as the interiors had been left completely ravaged from the blaze. They added in flooring, ceilings, plumbing, electrics and a bathroom.

"When we found it, it was a leaking shell really, with one toilet in a cupboard," Karlin told Dezeen.

She also replaced the building's shopfront, which she described as a "1980s monster", with a design more similar to its 1940s original. After trawling through photographs in New York City government archives to match it, the facade now features two windows for her to display objects.

Inside, brick walls and ductwork are left exposed. They are complemented by a mix of simple materials, including roughly finished plaster, concrete flooring and worn-looking wooden furniture. 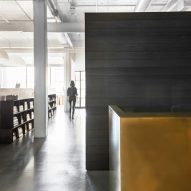 According to Karlin, the unfinished look references a Japanese aesthetic known as wabi-sabi, which celebrates the incomplete. The designer describes her showroom area as "perfect in its imperfections".

"I wanted to really achieve the contrast between areas of the rough and raw industrial with incredibly fine detailing," said the designer.

The space also forms an ideal moody backdrop for a number of works from Karlin's collection, including the bulbous Dimple light, and her Glyph sculpture – comprising a long coat hook from which bronze, wooden and metal elements hang.

Among her other works currently on display are three glass vitrines, which have black steel frames and house marble spheres suspended inside. Other marble and glass decorative items, and black planters, also populate the space.

For the design studio, Karlin custom-made furniture to create a homey feel.

"I wanted every one to feel as if they were working around their kitchen table so I designed our desks as a series of large shared beautifully worn wooden tables that we custom made," said Karlin.

The wooden pieces are influenced by the style of the American Shakers – a religious sect known for its simple furniture and architecture made in the late 19th century. For example, cabinetry in the kitchen is painted in pale tones, and topped with marble and an assortment of wooden chopping boards. Shelving is filled with objects for added extra decoration.

The eclectic decor is completed by a number of pieces that the designer collected while travelling, and antique chairs by New York gallery Dienst + Dotter Antikviteter.

Karlin – who was born in London – undertakes a diverse range of projects from her studio, including branding, graphics, interiors, set design and product design.

Her recent output has included a series of tables she designed with New York-based Fernando Mastrangelo.

Other workplaces that designers have completed for themselves include Nicole Hollis' studio in San Francisco, featuring a blackened wood library, and Woods Bagot's New York offices with dark fixtures and exposed concrete.

Photography is by Chris White.