Graduate fashion designer July Londono has created a collection of garments that double as home accessories like tablecloths, chair covers and bathroom towels.

Every item in Londono's Homewear range can be displayed and used around the house when not being worn. Her aim is to free clothing from the wardrobe, instead allowing garments to be left on show – literally as part of the furniture.

"The idea came about when thinking of the various ways we store and treat our clothing – we fold it, stack it, stuff it into drawers, seal it in plastic bags, and even throw it on the floor," said the designer.

"I began to think that closets are coffins and sought to explore various ways that clothing could experience the light of day instead of being left feeling lonely in the confines of our closets."

The collection features a variety of clothes made from fabrics intended for different rooms around the house.

Integrating seamlessly against a pink crushed-velvet armchair, a jacket and flared trousers have bottoms to match the dust ruffle. The items attach to the furniture piece via discrete poppers.

Similarly, a two-piece suit in a burnt orange velvet connects to a pair of curtains and becomes camouflaged against the material.

For the kitchen, a blue gingham outfit includes a long coat that can be draped over a table, and a top and pants that form placemats. 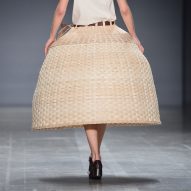 Another outfit, based on a denim jacket and jeans, is constructed from white towel material. Extra fabric under the arms and along the legs form rectangular pieces when laid flat, or hung over a bathroom rail.

Also, a poncho-style cape complete with a hood is patterned in black and white chequerboard, and serves as a shower curtain. Eyelets are incorporated into the material for hooks.

"Every garment is designed to be visually cohesive with the space it will inhabit when not being worn," Londono said.

Originally from Miami, Londono studied at Parsons School of Design in Paris and New York, from which she received a BFA in Fashion Design.

Earlier this year, students from the school worked with hospital clothing company Care+Wear to create a patient gown that provides coverage, while also allowing doctors necessary access to the body.

For more graduate fashion, check out our highlights from 2018 shows at the Royal College of Art, London College of Fashion, Antwerp's Royal Academy of Fine Arts and the Pratt Institute.

Photography is by Eileen Lu unless stated otherwise.