A Falcon X rocket tube converted by Elon Musk into a "kid-size submarine" is on its way to Thailand, to help rescue the last of the boys trapped in an underwater cave.

UPDATE: Musk has now confirmed on Twitter that the mini submarine was delivered to Thailand.

The SpaceX CEO and founder revealed on Twitter yesterday that his team were testing an adapted version of the rocket, which could function as an escape pod for the young football team.

He said that the pod was on its way. But he acknowledged that it may not arrive in time to be of use in the rescue mission – eight of the boys, aged between 11 and 16, have already now been rescued. Four remain, along with their 25-year-old coach.

"Mini-sub arriving in about 17 hours. Hopefully useful. If not, perhaps it will be in a future situation," Musk tweeted late yesterday.

The Wild Boar youth football team disappeared after walking into the cave system and becoming trapped when heavy rains flooded the underground chambers.

It took 10 days for a search party, led by British dive experts Rick Stanton and John Volanthen, to find them perched on a ledge above murky floodwaters.

Musk's solution involves using his SpaceX programme technology to create an underwater vehicle that could be steered by divers.

"Primary path is basically a tiny, kid-size submarine using the liquid oxygen transfer tube of Falcon rocket as hull," he tweeted. "Light enough to be carried by two divers, small enough to get through narrow gaps. Extremely robust."

The tech CEO tweeted videos of the adapted rocket equipment being tested in a swimming pool in LA. Footage shows a team of divers dragging the bullet-shaped pod through underwater obstacles before landing it and releasing a smiling volunteer from inside.

Musk already sent engineers to advise on the rescue

Fans of the entrepreneur first appealed to him on Twitter last week, calling on him to devise a hi-tech solution to help save the trapped group.

On 4 July, two days after the discovery, Musk tweeted that he was "happy to help if there is a way to do so".

He dispatched engineers from SpaceX and The Boring Company, his drilling company, to Thailand to offer assistance to the international rescue effort, which is being co-ordinated by the Thai military government.

Musk suggested that The Boring Company's advanced radar technology could be used to help dig an exit tunnel.

But plans to drill a rescue shaft were swiftly disregarded, as the football team were trapped half a mile below the surface of the remote Tham Luang Nang Non cave system, which runs under Doi Nang Non mountain.

In a tweeted conversation with Bangkok-based space entrepreneur James Yenbamroong, Musk also suggested inserting a metre-wide nylon tube through the narrow, twisting cave system, which could be inflated "like a bouncy castle". Rescuers could then bring the boys out through a system of air locks, he said.

The rescue team had planned to take up to four months to carefully execute the mission. Having delivered food and medical care, initial plans involved pumping water out of the caves so the group could simply walk out.

But with the monsoon rains about to begin in earnest and oxygen levels in the cave system dropping rapidly, it became apparent that they would have to act in a matter of days.

It was eventually decided that the boys would be taken out by teams of divers guiding them through the dark, waterlogged caves. Divers began giving the boys, some of whom cannot swim, a crash course in using underwater breathing apparatus.

Eight boys have now been rescued

On Sunday a team of 13 expert divers and five Thai Navy SEALS brought the first four boys safely out of the caves.

The rescuers then worked to replenish oxygen canisters and tighten the ropes they installed along the caves to guide the divers and their charges out through the dark submerged passages, before going back to save the others.

Four more boys were reportedly bought out today, with witnesses saying they were loaded on to ambulances. Four more boys and the coach are still in the cave, with heavy rain due in the next few days. 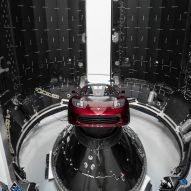 One of the biggest challenges in the mission is the management of oxygen supplies. The youngsters are stuck two and a half miles in to the four mile cave system – a journey that takes experienced divers five hours to make. A rescue base has been established in a chamber one mile from the boys.

On Friday, a former Thai navy diver died returning from a mission to deliver oxygen to the group. Saman Gunan delivered the tanks but lost consciousness on the return trip and had to be dragged out by his dive partner.

Musk's rescue pods could be used in space

Musk has assured his Twitter followers that, if used, his pod will fit comfortably through the underwater cave system, which has a choke point where the tunnel narrows to just 38 centimetres and tilts sharply upwards.

He said an inflatable replica would be used for a test run, so as not to block the escape route if it got stuck. He added that a submarine 30 centimetre smaller than the first was also nearly complete.

"The smaller sub will be more convenient for even harder to reach areas, but the base one should be able to squeeze in too," he tweeted.

"Smaller one will be even cooler, but the base sub is still formidable."

Musk has suggested the technology his engineers have devised for the rescue could also be used as an escape pod for space missions.

With SpaceX, he already has plans to send manned missions to Mars by 2020. Earlier this year he sent his own Tesla sports car into orbit on the "world's most powerful" rocket, the Falcon Heavy.