Walmart's textureless surfaces are intended to look as cheap as possible. But surely, mulls Aaron Betsky, even a little tactility could improve the stores and other similar spaces without breaking the bank.

These are not universal rules, but a return from a month spent in Europe to the United States, which is always much harsher in its economic realities than the countries over there, made it evident to me how prevalent the reality of texture discrimination is. Let's call it walmartism: the transformation of the spaces used by those with the least means into boxes devoid of texture.

The morning after I arrived back to my home at Taliesin in Spring Green, Wisconsin – all wood, stucco and stone, rambling spaces, and soft lighting – I had to make a supply run to the nearby Walmart. It was, as a trip to that warehouse always is, a shock. I stopped for a moment to think why.

The most obvious answer, and the one which had always satisfied me in the past, is size. Walmart is the best example in architecture of the attitude described in Morgan Spurlock's 2004 film Supersize Me, and that extends from the size of the one, big, undifferentiated space, all the way to the over-scale packaging and, of course, the size of many people shopping there.

What struck me at Walmart was how everything blared

Lest you think the latter remark is an unconscious bit of classism right there, it is fully conscious: because of diet, food deserts, and a lack of education, we have long ago flipped the idea that being fat means you are rich to it largely being a mark of a lower economic status. You can tell who uses Walmart and for whom it is intended just by looking around.

What struck me at Walmart this time was how everything blared. The surfaces are all smooth and often shiny, the lighting strong and even, and the graphics bold and colourful. Such spatial differentiation or texture as there is comes from an arrangement of aisles or a break in their ranks, rather than a change in definition to create separate areas. Even at a smaller scale, the packages are not only bright and shiny, but there is also little to differentiate them other than the words that tell you what's inside.

The obvious reason for all this screaming sameness is economics. Texture is expensive both to build and to maintain. The use of polished, but unfinished, concrete floors, the lack of walls, the sea of fluorescent light, and the standardisation of components are all design decisions that save costs in materials, assembly, and cleaning.

More than that, they also – and for that very reason – signal economy. Everything in and about Walmart not only is cheap, but is meant to look affordable. It tells you whether you belong there. When a store tries to go upscale, one of the first things it tries to do is to lower the visual noise level and increase the texture.

The obvious reason for all this screaming sameness is economics

McDonalds, where famously every surface was once the result of scientific research into efficiency, now has a standard model that presents wood slats and stone veneer to the world, while inside dark colours and lower lights are meant to show you that this not your grandfather's burger joint. There is a reason for that: they serve cappuccini there now, and their prices are no longer the lowest in town. McDonalds has gone ever so slightly upscale, and it shows.

You can see the same gradations when you walk through a shopping mall: the low-end stores are all light and openness, while those that will tax your wallet are subtle, differentiated in space and light, and often quieter. 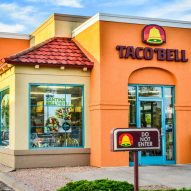 "The architecture of the Americas is not white"

This assumes, however, that you will even enter the kind of shopping mall where classes once mixed. In reality, the low-end ones have dissolved their spatial complexity into either big-box retail strips or outlet malls, where walmartism prevails.

Meanwhile, the more expensive stores have migrated either to stand-alone slots on expensive streets or into New Urbanist pseudo-malls whose multiple wall treatments and buildings are meant to mimic traditional urbanity.

Texture is expensive both to build and to maintain

Walmartism is evident even within other types of buildings. Many American airports are designed in that style but, if you are classy enough to be allowed to enter into a lounge, you will find that the ceiling height and light level drop, while wood, textured walls, different seating nooks, and darker colours appear.

At Las Vegas' airport the differentiation is even subtler: step into one of the areas where slot machines tug at your wallet and your arm, and carpet appears under your feet.

Walmartism becomes particularly pernicious when it does not just sign where different classes belong, but when those with less means find themselves stuck in its glare. Emergency rooms, waiting areas at government offices, and the inside of buses and trains are usually walmartised, but offer little of the goodies with which the actual store surrounds you.

Instead, you find yourself stuck on plastic seats staring down at polished floors or up into strips of light, warehoused with countless others in a cocoon of cheapness. If you are able to afford even a private bus company, or a more upscale medical establishment, and you will be spared that part of the experience.

The question is whether architecture and design could do anything to alleviate walmartism. It is difficult because there is a kind of Heisenberg Paradox at work here: the moment designers try to intervene, even if they do so pro bono, the result almost inevitably becomes more expensive. Anything that differentiates, softens, or responds to the human body, costs money.

McDonalds has gone ever so slightly upscale, and it shows

Walk into a Target, which famously has hired actual designers to work on both their stores and their products, and where there is an ever-so-slightly subtler organisation of space and much better graphics, and you will notice that the goods also cost just a few pennies more.

Yet it should be possible to do better. After all, we have discovered out how to make industrial lofts not only liveable, but desirable, and McDonalds – for better or for worse – seems to be doing fine.

What is perhaps even more pertinent is that the clever folks at IKEA seem to have figured out how to create labyrinths worthy of any modern minotaur, slathered with wood veneer and festooned with pin lights, that offer equally textured goods at prices that are somewhere south of Hades. Not surprisingly, IKEA is also about the only major retail establishment in America that seems to welcome a wide swath of clients from the whole economic spectrum.

Architects and designers need to design social housing and affordable medical devices. They need to figure out how to make the built environment more sustainable and accessible. They need to stop designing jails and walls and useless corporate towers. But, one of the biggest contributions they could make towards building a better world would be to just figure out workable and affordable strategies that would take some sandpaper to the slick surfaces of walmartism.