Kingston University graduate Poppy Booth has created a pair of tongue-in-cheek objects that comment on the "ridiculousness" of consumer habits.

Called Megaphone and Soapbox, the project features a megaphone for introverts and a soapbox for nihilists – both made from fibreglass resin.

The first item, the Megaphone For Introverts, features an oversized fibreglass resin structure that allows "shy but politically-minded protesters" to share their views while hiding their faces.

Meanwhile, the soapbox – an object commonly used by activists as a pedestal from which to protest – is composed of a single box with one side open so that as well as protesting, it can also be used for other purposes, such as carrying objects or sitting on.

Booth reasons: "As Nihilists believe that life is meaningless, they are unlikely to have much to preach about. [The design] showed that I did not myself want to preach but to change people's attitudes to their possessions more subtly."

The soapbox was designed in response to a brief set by London furniture store SCP that asked for students to design a small, easily portable piece of furniture that people could buy and carry away from the store under their arm.

Choosing to rebel against the overtly consumerist brief, Booth says her contradictory soapbox is designed to encourage people not to be so easily seduced into buying things. 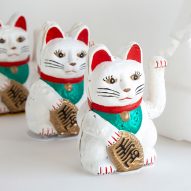 When conceiving the objects, Booth, who studied on the London school's Product and Furniture Design bachelors course, was influenced by the anti-consumerist work of Italian modernist designer Enzo Mari.

"Enzo Mari is a huge inspiration to me," said Booth. "He has spent a lifetime fighting against 'pornographic window dressing' trying to liberate people from the shackles of advertising."

She was particularly inspired by Mari's Autoprogettazione or Proposal for an Auto-design manual, which was created by the Italian designer in 1974 as a design guide to a collection of furniture that could be assembled from the most basic materials, using just a hammer and nails.

"I believe that if more people were involved in the making process then they could understand a piece of furniture, how it works structurally using the minimum amount of material for maximum function, and not be deceived by the hundreds and thousands sprinkled on top," she explained.

Megaphone and Soapbox was on show at New Designers week two, which took place between 4 and 7 July. Other graduate projects include a series of brass tools that aim to encourage muscle memory to help train dancers and a portable cooking set for kitchenless millennials.