Fashion brand Moncler has released an all-black collection designed by Kei Ninomiya, which was inspired by the Italian brand's classic down jacket.

The collection was created as part of the brand's Moncler Genius series, which was unveiled at Milan Fashion Week earlier this year.

Moncler Genius is a year-long project that has seen eight emerging designers create eight capsule collections for the brand, all inspired by the classic Moncler down jacket.

Described by the brand as "wearable geometry", Ninomiya's collection pairs techniques like knitting and embroidery with unexpected materials like shiny nylon and leather.

Modular elements, such as leather flowers, are made using techniques such as intarsia, quilting, stitching, applique and ruffling. These elements are then multiplied and assembled to create complete forms.

After being unveiled during Milan Fashion Week, Ninomiya's Noir collection is the second collection in the series to be launched in stores.

Ninomiya – a protégé of Rei Kawakubo – heads up his own brand, Noir Kei Ninomiya, under the Comme des Garçons umbrella. He is known for creating garments in a restrained palette of black, using white or red as occasional highlights.

The Japanese designer told Dezeen that his all-black collection for Moncler carefully blends his own aesthetic with the 66-year-old Italian brand's DNA.

"We use many very unusual processes to make clothes, such as connecting small modular parts," he said. "The biggest challenge was to find a way to adapt the down material to our style of creation."

"They have deep respect for creation and were very open and flexible to our (Noir's) style of making things. It was really an interesting experience to work with them," continued Ninomiya.

"Moncler Genius is a challenge of innovation, and a progressive project in every respect. It allowed me the opportunity to develop new techniques of down. Progress always stems from the way things are made."

Remo Ruffini, Chairman and CEO of Moncler, told Dezeen: "Kei represents the quintessence of craftsmanship and his sense of experimentalism is really outstanding. Moreover each designer worked on a specific collection to target the different Moncler audiences."

"It was surprising to see the way Kei was able to create something new, developing new possibilities and shapes of down- wear never explored before," he continued.

Other Moncler Genius designers include Hiroshi Fujiwara, who runs the Japan-based label Fragment. His Moncler Fragment collection was the first to launch last month. 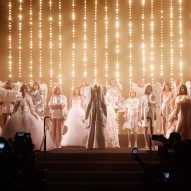 The eighth Genius collection to hit stores will be Sandro Mandrino's, who has curated the Moncler Grenoble collection – Moncler's long-standing technical skiwear line.

"Due to the natural evolution of the brand, inherent to its DNA, in February we launched a new strategy aimed at disrupting the traditional twice-yearly rhythm of the fashion shows, by rolling out collections once a month," said Ruffini of the brand's Genius series.

"The world is changing as fast as ever and the digital era has changed the consumer's attitude in a season-less perspective," he continued.

"Moncler's new direction aims to establish a constant dialogue with the consumers through monthly projects, talking to different audiences and remaining always relevant, while being able to evolve."

The 6 Moncler Noir Kei Ninomiya collection was launched at Dover Street Market in Ginza on July 24th, 2018 at an event inspired by the garments' shiny black palette.

Other fashion launches this year have included a series of dresses by Iris van Herpen that replicate feathers, and John Galliano's Artisanal AW 2018 women's collection for Maison Margiela, which features layers of sorbet-coloured garments worn back to front and iPhones clamped to model's calves.