Fashion designer Iris van Herpen has created a series of dresses that replicate the feathers and soundwave patterns of birds in flight, and showcased them alongside a kinetic lighting installation by Studio Drift.

Amsterdam-based Van Herpen studied the movement of birds' wings to create her Syntopia collection, which she presented at Le Trianon on 2 July, for Paris Haute Couture fashion week.

To accompany them, Lonneke Gordijn and Ralph Nauta of Studio Drift created an installation of moving glass tubes that also capture the motion of bird flight.

Each of Van Herpen's 17 designs combine both organic and inorganic forms, to highlight the convergence of natural biology and manmade technology.

Traditional weaving techniques are combined with high-tech digital fabrication, resulting in a series of garments featuring complex parametric patterns. These range from pleated dresses made from liquid-coated silk organza, to wool coats made using laser cutting.

Each of the patterns is based on the movements made by birds' wings and feathers.

"As a former dancer, the transformation within movement has hypnotised me," said Van Herpen. "For this collection I looked closely at the minutiae of bird flight and the intricate echoing forms within avian motion."

She used chronophotography – a Victorian photographic technique that captures movement in several frames of print – to find similarities between the way fabric drapes and the way that feathers move during flight.

"Studio Drift inspired me to look more closely at the draping of a garment through chronophotography," said Van Herpen.

"By slowing down time into split seconds, I started breaking down the usual draping of fabric, to then layer the milliseconds all slightly shifted, like the layering of a bird's feather."

The designer then translated these frames into thousands of layers of transparent organza. Continually overlapped in different directions, she laser-cut and heat-bonded them with Mylar and cotton, to create the effect of a time-lapse motion. 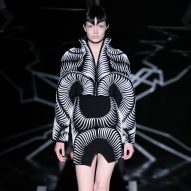 Similarly, she translated the sound-wave patterns of a moving wing to create her Mimesis corset dresses. Constructed from laser-cut Mylar, black cotton, red organza and transparent black acrylic sheets, these are layered to mimic the architecture of a feather.

The lines of the dresses resonate with Studio Drift's kinetic installation, which was suspended above the heads of models walking the blacked-out runway.

Called 20 Steps, the site-specific structure comprises 20 delicate glass tubes that move up and down, emulating the various motions of a bird in flight. The designers see it as a tribute to the evolution and the human desire to be able to fly.

"The moving wings of delicate glass represent the constructive steps of continuous improvement," explained Van Herpen. "The vivacious glass bird flows in symbiosis with the models while they move over the runway, their delicate interaction emphasises the fragility of new worlds living and soaring together."

"Whether they are waves, flying birds or running men; all movements on earth can be seen as the carrier of innovation, a true desire for all species to deeply connect," added Gordijn.

Van Herpen, who interned at Alexander McQueen in London before starting her own label in 2007, is known for employing innovative techniques to unusual materials in her collections.

For last year's couture week in Paris, she presented a collection of 18 garments featuring biomorphic elements and rippling fabrics, designed to explore the contrasts between water and air.

Back in January last year the designer also used visual trickery to create hypnotic garments that distorted the models' bodies.

Studio Drift is also known for its innovative designs, which draw on science fiction. A major retrospective of the studio's work is currently on show at the Stedelijk Museum Amsterdam, featuring a floating concrete monolith and a light sculpture made from dandelions.

Photography is by Yannis Vlamos and Paul Blind.