Architect Benni Allan has used colourfully painted panels to create an all-new facade for his former school in Alicante, Spain, on a very meagre budget.

The London-based Estudio B founder sourced corrugated bitumen panels and painted them in varying shades of red and pink, to create a new exterior for the 30-year-old prefabricated building where the school teaches its youngest students.

He managed to keep the cost of all the materials within the tight £1,000 budget, then did all the building work himself, with help from his younger brother and a team of students from the University of Greenwich, where he teaches.

"This project means a lot to me," said Allan. "The school has been part of my whole life and has helped to define who I have become – I am very excited to be able to give back in some way."

Allan's father set up the school in 1973. It is located in a rural area where, as a result of Spanish planning restrictions, no new permanent structures can be constructed. It was for this reason that the primary school building was originally specified as a simple prefabricated block.

Despite regular maintenance, the block had naturally become tired-looking since it was first erected in the 1980s. Allan has fond memories of being taught inside it himself.

"It wasn't supposed to last that long – it's technically temporary because that's all we could build on the site," he told Dezeen.

"I said to my dad, 'let's try and do something, let's give this building a new life". He told me they didn't have much money. So I just told him to work out a budget and that I would come up with something."

The corrugated panels Allan chose are more typically used for constructing warehouses and farm buildings. These panels are cheap to maintain and can be easily cut and fixed onto a lightweight aluminium frame.

"We went to a warehouse and we found these panels that are used everywhere," said the architect. "We thought, let's try and cut them up a bit, paint them... we worked that you could get these amazing ranges of pinks and reds."

Allen and his team created a palette of subtly different shades, which resonate with a number of local references, from terracotta roof tiles in nearby villages, to the colours worn by Valencian women during festivals.

This led to the project being called La Falda, which translates as "the dress".

"The colours that we ended up choosing were very subtle," said Allan. "We didn't want it to be too patchy, which makes it feel a bit more like it's handmade."

"The building completely transforms throughout the day, which is nice," he added.

Since completion, Allan said he had heard students referring to the revamped structure as "the new building", which he sees as confirmation that the project has made an impression on its occupants.

"I hope that the dressing of the school will open students' imaginations to the possibility of what a building is, and also what learning spaces can be," he concluded. 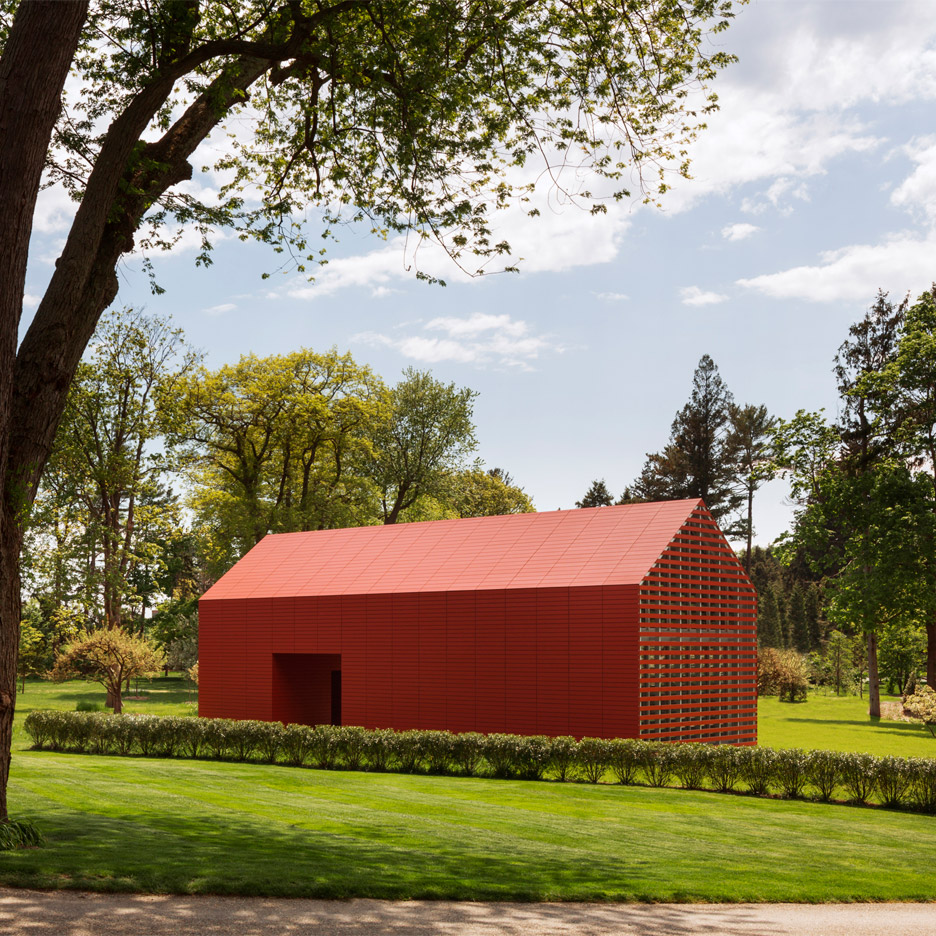 "I feel strongly that learning environments should foster and empower students of all ages to be curious," he continued.

"I think an understanding about materials and buildings is as important to wellbeing and learning as other subjects, and being sympathetic to the built environment around us is key to a sustainable future."

Other examples of buildings that have been given a facelift with new cladding include a modernist house in London covered in charred wood strips and a 1950s house featuring a new reflective stainless-steel exterior.