Spanish studio ABLM Arquitectos used mirrored panels to create an "almost invisible" upper floor for this school in the city of Salamanca, but the lower storey covered in stripes of brightly coloured tiling.

The locally based architects designed the 2,600-square-metre building for a neighbourhood on the outskirts of the city in north-west Spain, which is transforming into an increasingly industrial area.

While the upper storey of the school is clad in mirrored panels of composite aluminium to reflect the surroundings and visually reduce the scale of the building, a facade clad in brightly coloured ceramics surrounds the playgrounds at ground level.

The underside of canopy that extends out to shelter the entrance is covered in the same mirrored cladding, reflecting the tiled pattern onto the ceiling.

"In the metropolitan area of ​​the city of Salamanca, the municipality of Villares de la Reina stands out for its transformation during the last decades as it has one of the industrial estates of the city," explained architects Arturo Blanco and Laura Martínez.

"The changes have partly disfigured the scale and transformed the material landscape conditions."

"The almost invisible school proposes a reflection on the domestic scale of this kind of infrastructures, where the little ones must find spaces that they can catch, and places with which they can dream," they continued.

The seven tile colours chosen by Spanish ceramicist Toni Cumella – ranging from pink to maroon and green – are intended to symbolise the individuality of every boy and girl attending the school.

Inside, translucent walls and pale flooring is offset by areas of strong turquoise and red wall panelling. 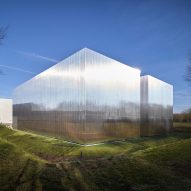